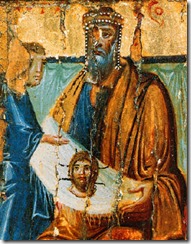 He is up with a blowup of a part of the picture on the right, as described thus in Wikimedia Commons:

Abgar with the Image of Edessa. Photo of 10th century icon at St Catherine’s monastery, Mount Sinai. This is a wing of a triptych, the missing central panel of which presumably showed the Image. “Abgar” resembles portraits of Emperor Constantine VII Porphyrogenitus, in whose reign the Image was brought to Constantinople in 944; the icon probably dates to soon after this. It is the earliest surviving representation of the Image or Mandylion.

CLICK HERE to see Stephen’s blowup as it is displayed in his blog space at Blog Spot. He wonders in his own interrogatory-styled caption of the blowup of the face of Jesus if this is “the most significant Shroud discovery since the Pray Codex?”

A few inches down the page in his posting he tells us that “According to a leading Shroud pro-authenticist who does not want his name to be mentioned, this is, as far as he is aware, a new discovery by me.” (me = Stephen)

What was discovered? That the picture within a picture has reddish mark where the reversed 3-shaped bloodstain is found on the Shroud of Turin and 13 of the 15 Vignon markings.

I agree with the anonymous “pro-authenticist. This may be a new discovery. I don’t recall it being mentioned before. And Stephen can use my name. The only thing is I don’t see many of the Vignon markings yet.

Don’t worry if you don’t see them, either. Stephen has a better picture that he just obtained permission to use and he will show this to us later, in his next posting. He probably didn’t need to get permission (but maybe so in Australia) because a U.S. court has ruled that a “slavish” photograph of flat art that is in the public domain is not protected by copyright. Read this interesting story by Bernard Starr in HuffPo.

The important thing is to see the  better picture. Why not show it now? 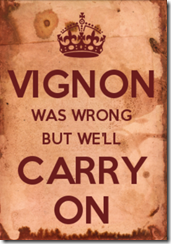 I don’t think issues regarding the Vignon Markings are resolved. See Vignon Was Wrong But We’ll Carry On. There are 53 comments on that posting. It is too bad that Stephen refuses to read comments because there is a lot of valuable information from very knowledgeable people in those comments.

There is also: A Guest Posting by O.K. – Even in China They Know Jesus’ Characteristic Features

As for quoting from Stephen’s blog, he is attempting to impose a limitation of his own making on how much can be quoted. I always apply fair use principles as defined by U.S. Copyright Act. I think that this should suffice.  Keep in mind that I am publishing my blog in the United States. Here are the guidelines as they are stated on the WordPress site:

There aren’t hard and fast rules when it comes to defining fair use. However, the Copyright Act sets out four factors for courts to consider:

1. The purpose and character of the use: Why and how is the material used? Using content for criticism, comment, news reporting, teaching, scholarship or research is usually fair. Additionally, using material in a transformative manner, that is to say, in a manner that adds new expression, meaning, or insight, is also more likely to be considered fair use over an exact reproduction of a work. What’s more, nonprofit use is favored over commercial use.

2. The nature of the copyrighted work: Is the original factual or fiction, published or unpublished? Factual and published works are less protected, so its use is more likely to be considered fair.

3. The amount and substantiality of the portion used in relation to the copyrighted work as a whole: How much of the material is used? If the “heart” (the most memorable or significant portion) or the majority of a work wasn’t used, it’s more likely to be considered fair.

4. The effect of the use upon the potential market for, or value of, the copyrighted work: Does the use target a different market/audience? If so, it’s more like to be fair use. It’s important to note that although criticism or parody may reduce a market, it still may be fair because of its transformative nature. In other words, if the criticism of a product influences people to stop buying the product, that doesn’t count as having an “effect on the market for the work” under copyright law.

It should be noted that Stephen quotes more than anyone I have ever encountered in blogging. In fact, he will often copy almost every paragraph of a news story into his blog and inject commentary between sentences. One example is his criticism of an ANSA English News service article, “Holy Shroud to be exhibited April 19-June 24 2015.”  I could list dozens of examples or anyone may click here for a representative list of your quotation-loaded postings.