Christ of Saint John of the Cross by Salvador Dalí

A friend of mine, a Jesuit priest, told me that this painting was, “the Father’s view from above.” As such, he said, it does not have any nails or blood. Theologically, that may be interesting, but Dali tells us that he was inspired by a dream to paint it this way. 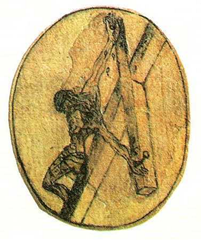 The painting is known as the "Christ of Saint John of the Cross", because its design is based on a drawing by the 16th-century Spanish friar John of the Cross. The composition of Christ is also based on a triangle and circle (the triangle is formed by Christ’s arms; the circle is formed by Christ’s head). The triangle, since it has three sides, can be seen as a reference to the Trinity, and the circle may be an allusion to Platonic thought. The circle represents Unity: all things do exist in the "three" but in the four, merry they be.

There is more at Wikipedia. 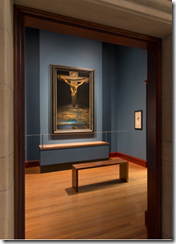 The image shown above is intentionally low resolution and is not suitable for commercial printing. As with the English-language Wikipedia, hosted on servers in the United States by the non-profit Wikimedia Foundation, the use in this blog qualifies as fair use under United States copyright law.

At left is a photograph showing how the painting is exhibited at the Kelvingrove Art Gallery and Museum in Glasgow, Scotland. Having been attacked and damaged once, it now must be protected behind a glass shield.