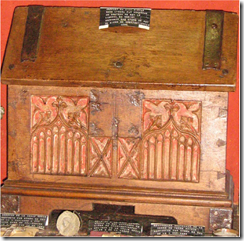 Maybe it is because I haven’t had coffee yet today. Or maybe I’m just growing old. Stephen Jones wrote this baffling piece during  the past week:

… there is a 13th century wooden chest which according to de la Roche family tradition, was used to transport the Shroud from Athens to France, and indeed a label on it in modern writing states the family tradition that it was used by Otho de Ray to bring the "the Shroud of Christ … from Constantinople [in] 1206":

However, the style of the carving is late 14th century, although the bottom of the chest may be original[53]. The inner dimensions of the chest in centimetres are ~37.5 long x 16.5 wide x 25 deep[54]. This would neatly fit the 437 x 111 cms Shroud[55], if it were folded twelve times long and eight times wide, i.e. 437/12 = 36.4 cms x 111/8 cms = 13.9 cms[56]. This twelve by eight folds is a simple and economical folding arrangement of the Shroud, and since Othon’s family would be unlikely to know the true dimensions of the Shroud if they had never owned it, this ~37.5 cms long x 16.5 cms wide `floor plan’ of the bottom of the Ray-sur-Saône chateau chest, which is claimed to have once held the Shroud, is strong evidence that Othon de la Roche really did bring the Shroud with him from Athens (and before that from Constantinople) to his Ray-sur-Saône chateau in Burgundian, France in 1225!

The bottom is maybe original?  What does that mean?  That the bottom is older than the rest of the chest? Did someone build this chest around an older bottom piece of wood?  Why?

Folded twelve times one way and eight times the other way? This is economical?  Can you really do so and have any semblance to the dimensions Stephen suggests? Try it with a bed sheet; just make the first fold widthwise and pretend you made it lengthwise. It will be close enough. Actually, I think Stephen meant fold it into twelfths and then eighths. Still, try it.

Thinking that the Othon de la Roche family would not have known the size of the shroud if they didn’t own it and hence would not perhaps have (or there wouldn’t be) a chest with a bottom that was 37.5 cm by 16.5 cm, which is only approximate to a speculated folding pattern does not seem to me strong evidence that Othon de la Roche really did bring the shroud from Athens.

What am I missing?