Is a high energy laser beam really needed to model the Turin Shroud? Maybe those Italians should have tried pizza ingredients first, and a hot oven…

Sometimes, you need to wait for Colin Berry to finish adding bits and pieces to his postings. When things settle down,  it is easier to report on them. Colin seems to have done so now. It is time to look at his latest and greatest technique for creating an image that may or may not be like the image on the shroud:

“It’s a distillation of some 40 months and more of virtually non-stop effort since Dec 2011 to ‘model’ the ‘enigmatic’ TS body image,” he tells us.

It would have been nice to use a real human subject instead of the plastic toy The technique lends itself to scaling up, and leaves the volunteer (?)  unharmed, except for a coating of vegetable  oil and plain white flour (most of that being imprinted onto linen, leaving less to be showered off).

Alas. I do not have a 4m x 1m length of linen, and even if I  did, one suspects the sourpuss contingent of sindonology would waste no time in telling me it had to be herringbone weave, centuries or millennia old, traditionally-bleached, lacking modern-day optical brighteners etc etc etc ad infinitum, ad nauseam. Nope. This science bod is content to model the TS characteristics, showing that no fancy gee whizz 20th/21st century technology is needed, certainly not pulses of intense uv rays  from excimer lasers or neutrons from rock-crushing tectonic activity etc.(the sort of things that could theoretically have affected a particular linen shrouds in a 1st century rock tomb we are solemnly assured).

No real argument there. I don’t know, however, if it is scalable. It seems that it would be. And I don’t know enough about chemistry or the science of images to weigh in on the issue of bleaching “etc etc etc ad infinitum, ad nauseam.”

Let’s stick with the small scale model, and show how, step-by-step, the above image was created that, from where I’m standing, ticks an ever-growing number of boxes that says: YES – it is looking increasingly like a valid model, despite it using homely medieval technology that today’s blog-readers can confirm for themselves in less than an hour in their own homes if so inclined.  It requires nothing more than: (a) linen (I get mine from the clothes rack in charity shops, ladies’ white summer trousers especially) (b) plain white flour (c) vegetable oil (d) a hot oven (e) a bar of soap. Yes – indcredibly, insultingly some might say, that’s my DIY list for what’s needed.

Nothing insulting about any of that. It is actually intriguing in a “Bill Nye the Science Guy” sort of way.

Okay. Now you need to read: Is a high energy laser beam really needed to model the Turin Shroud? Maybe those Italians should have tried pizza ingredients first, and a hot oven…

The rest of this posting will be in two instalments: first, the procedure for obtaining the above result, namely a faint, fuzzy, negative TS-like image and then, later, possibly tomorrow, the evidence from studies reported already on my other site that the image you see above meets many , possibly most, of the criteria of the TS image at both macroscopic and microscopic level.

3D properties? Do the faint and fuzzy imprints you see above respond to 3D rendering in software programs like ImageJ? is that too much to hope, given typicaly awestruck observations such as this one from the shroudstory site: 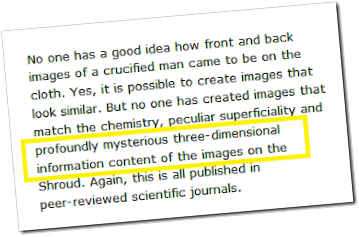 Fact: there is nothing in the least bit "profoundly mysterious" about the 3D properties of the Shroud image, especially if it’s a contact imprint. This investigator has shown over and over again in the course of  3 years of entering a large variety of images into Image J that the 3D response of the TS, far from being ‘profounsly mysterious’ is in fact entirely predictable. What would be unusual would be for it NOT to respond to 3D rendering, given the way the software operates. Here’s an image that hopefully illustrates my point: 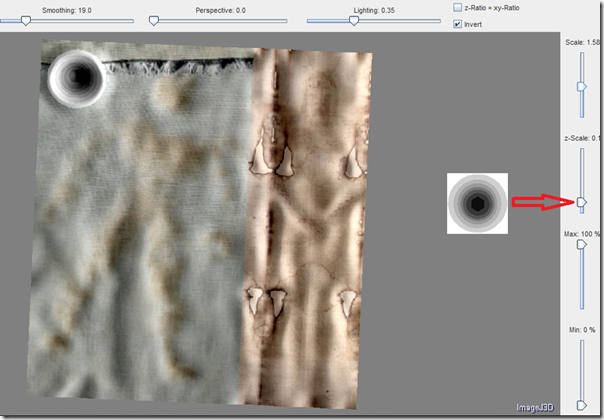 Yes. One can enter 2D diagrams with no 3D history, like those concentric circles above, and they show a comparable 3D response (top left) to that of the model image OR the TS. Why is that? Look at the z scale next to the red arrow. It is on its default MINIMUM setting of 0.1. The software sets that non-zero default setting, meaning that ANY image one enters that has any kind of intensity gradient, simple stepped ones included, produce a 3D response.The latter is entirely artefactual unless one has evidence to the contrary. This investigator knows of no evidence to suggest that the so-called "3D properties" of the TS image are any different from those of contact imprints generally.

Late insertion: I’m saying there is no 3D mystique until proven otherwise. Right on cue we hear the rejoinder: "There is 3D mystique until YOU prove otherwise", adding technical details like RGB balance that were addressed previously in discussion with "OK" in Poland,.

Nope. i’m not buying into that pro-authencity attempt to shift the burden of proof. I repeat: there is NO 3D mystique until proven otherwise. The so-called "unique 3D encoding" of the TS image is pure agenda-driven moonshine.

See also this later comment from the inestimable Hugh Farey, with new 3D rendered images of this blogger’s hand both in original colour AND grayscale. Both show 3D enhancement (needless to say).  Thank you Hugh.

I said “profoundly mysterious” because I don’t know how, and nobody knows how, the 3D information was derived in the shroud image. Maybe it was Colin’s way? I don’t know. I would not have introduced the word “mystique”  as he did. Language is too tricky for that.   That is also why I don’t say the 3D data is “encoded.”

I’ve said, clearly, that I don’t think we can say with any certainty that the brightness information, the 3D information, means body-to-cloth distance. I’ve said that there are other methods of deriving that sort of information and that the information might be real or imaginary.  Regular photographs and paintings, by-the-way, can contain that information. It is wrong to say they can’t. Most don’t, though.

Colin has created an image that is also a brightness-map.  You can plot 3D images with it using ImageJ. The real question is this: Does the brightness-map correctly represent the shape of the body (the plastic soldier)? I’m not convinced it does. Or it is too crude.  We need some better pictures to work with. We need to do more in ImageJ. We need to be sure that ImageJ is being used correctly.

By-the-way, I have been impressed with the 3D imaging of Colin’s hand. So maybe Colin is onto something.  In his blog, however, he is trying to make an issue out of nothing by playing with the word mystique.

(Click on the image of the hand to see this image enlarged).

32 thoughts on “Colin Berry’s Latest and Greatest. Is it Enough?”