I hope your are the right person to write.

On the blog "Shroud of Turin blog" there was an article on november 2, 2011 "A Reaction to Giulio Fanti’s Suggestion" there ist also a photo.

I’m part of a student group at University of Hannover, Germany planning an exhibition about a seamless shirt in Steinhude. For this would like to design a map of europe with all the seamless clothes we found during our research and we would like to use the pictures. Who has the licence of this photo and can allow us to use it?

No, I don’t know who has the license for the photo. You might try doing a Google image search on tunique d argenteuil. From there you can try all the many websites who are using the image. Such is the nature of the internet.  Moreover (at least in the U.S.) the image may not be copyrightable just as photographs of the shroud are not according to the U. S. District Court for Southern New York which has held that exact photographic copies of public domain images could not be protected by copyright.

NOVERMBER 2, 2011. I’d forgotten about that posting. So, for a slow news day in August, here is a repeat:

A Reaction to Giulio Fanti’s Suggestion 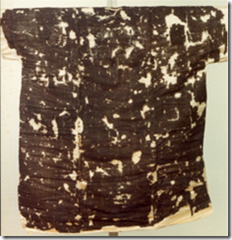 With regards to the SSG posting about the Argenteuil robe and carbon dating by Giulio, I am speechless. Good grief.

In the Catholic Church there are two competing claimants to the title of the seamless robe or chilote of Christ. Legendary accounts of the robe at Argenteuil’s provenance has it being given by the Byzantine empress Irene to Charlemagne in the 9th century. In other words it came by way of Byzantium. The earliest extant written records go back only to 1195 and describe it as a child’s garment. We can’t know otherwise by looking at it because it was cut up into many pieces during the French Revolution and each piece was hidden away in a different secret location. Today only few pieces remain that have been seamed together. Some do claim that it is the seamless robe but there isn’t any good evidence for doing so.

A robe at Trier is an alternate claimant.  Like the Argenteuil robe it only has a certain documented history that goes back only to the 12th century, though legend takes it back to St. Helena. Over the years it has been repaired and patched so much that it is hard to tell what might be authentic and what might not be. It is as good a candidate as the Argenteuil robe.

The claims don’t end there. Allegedly, the robe, or at least some piece of it, is to be found in the Patriarchal Svetitskhoveli Cathedral in Mtskheta, Georgia, brought to that city by a Jewish Rabbi called Elias who bought the entire robe from a soldier who was present at the crucifixion. It is as good a story as any and I suppose it more likely true than the other stories. Portions of this robe are found at the Cathedral of St. Peter and St. Paul in St. Petersburg, Kiev’s Sophia Cathedral and the Moscow Cathedral of the Dormition.

The Shroud of Turin, on the other hand, has a respectable history going back to the Hymn of the Pearl, the letters of Sister Egeria, the Mozarabic Rite, John of Damascus, the capture by Curcuas and the subsequent witness of Gregory Referendus and Constantine VII and the Pray Manuscript. All of this would be almost worthless information were it not for the distinct, still inexplicable image on the Shroud.

The Sudarium has a reasonably well documented history back to the seventh century. From bloodstains there are reasons to believe that these two cloths covered the same body at about the same time. The idea that they might have been forged, both or one or the other, to have such similar bloodstain patterns is implausible to anyone who traces their possible paths during the Medieval. The Shroud and the Sudarium have been carbon dated with very dissimilar results. There are valid reasons to doubts the correctness of those dates independent of their differences.

To throw the Argenteuil robe into the mix with the Shroud and Sudarium and claim that a series of undesirable radiocarbon dates suggest some supernatural aura attached to Jesus as a source of c14 rejuvenation is preposterous beyond scientific embarrassment.

9 thoughts on “Remembering an Earlier Posting About The Seamless Robe”