Colin’s posting on his blog is so long and cumbersome it is slowing down my browser and making my mouse jerky. So first, read the comment, below, the that Colin wrote in this blog and I mined from my own site. (BTW: When I gather information from Colin’s site he complains that I am mining his site for content. When I don’t, he mines it for us.) I had said it was a slow news day. He said:

Slow news day? Not on my site… Were you aware that STURP’s Robert Bucklin MD, consultant pathologist, was in fact doing his virtual biopsy a year before STURP’s trip to Turin (which Bucklin may or may not have joined, depending on whose account one believes), so was NOT done on the “Shroud” itself but on PHOTOGRAPHS. What’s more, the photographs used were long-in-the-tooth 1931 Enrie negatives, as this video still from David Rolfe’s “Silent Witness” shows, made in 1977 (released in 78) a year before STURP. 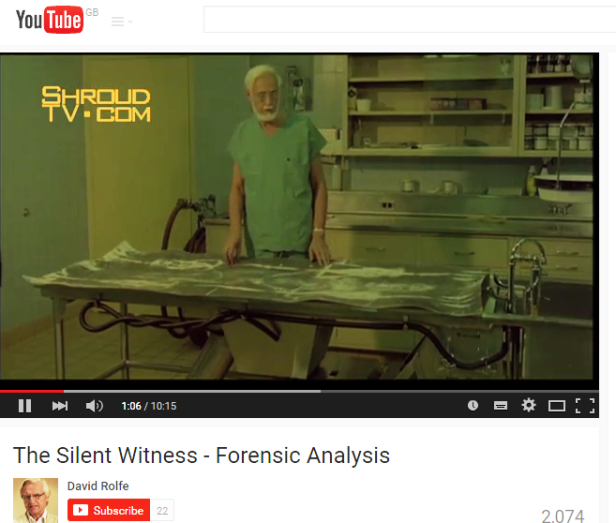 How many people reading Bucklin’s autopsy would realize it was NOT based on the “Shroud” itself, seen in natural colour with his own eyes, but a B/W negative on which he claims to see “wounds” etc and much else besides? One suspects that Bucklin’s “autopsy report for STURP was written well before the STURP descent on Turin, so could not have benefited from the new photography done by Barrie Schwortz, Mark Evans and other documenting photographers, far less the far superior imagery we now have from Durante (2002) on Shroud Scope.

Given the autopsy relied entirely on ancient photographs, why was ‘true-believer’ Bucklin(his own admission) selected as officlal STURP pathologist? Why weren’t the same photographs sent to other pathologists for their opinion? The more I learn about STURP and its largely self-selected personnel, the less I like.