Colin is upset — or something. He writes in his blog: Reaction to my new and absurdly simple "stick ‘n’ stain" model for the Turin Shroud? So far, one of stunned silence or ill-concealed contempt.

Colin guesses why there is stunned silence:

It’s hardly surprising, is it, that a model for the Turin Shroud that starts with  "Mix some plain flour and water 700 years ago" is hardly calculated to set the world of sindonology on fire?

But that’s in essence what was proposed some 6 weeks ago, and to which the response might loosely be described as looks of blank incomprehension from some (well, the internet equivalent thereof) or expressions of derision and contempt from others.

I’m sorry that the model uses so plebeian a commodity as plain flour as imprinting medium. Had I given it more thought, it could so easily have been something more upmarket.  Saffron? From Saffron Walden, Essex,  hopefully to give a UK connection with medieval France, and attract the attention of the Times and the Guardian?  Saffron would certainly give an instant yellow imprint, eliminating the need for that hazardous second-stage development with nitric acid.  But would the sceptics, whether pro- or anti-authenticty,  buy into that story: "TS image is simply a saffron imprint"? I doubt it somehow. Shame. I could have stayed in the cosy well-appointed kitchen laboratory, avoiding the cold confines of my garage had safe old saffron been the answer.

I must also apologize for describing it as the "stick ‘n’ stain" model in my last posting. How utterly common can you get?

But I have this difficulty you see. It’s to do with that serendipity thingy. You know, you start off with a brilliant idea to try this or try that, and along comes something totally unexpected and surprising that one would never have predicted in a million years. 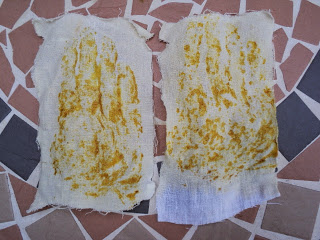 Saffron?  Did you consider finger paint? Actually, here is the picture hot-linked from Colin’s site.

Colin, we have to wait for you to finish posts.  We never really know when you are done.  Now, I can say to everyone, go read Are the peculiar fingers of the Turin Shroud a pointer to medieval forgery? My new imprinting "Stick ‘n’ Stain" model says they are.

And I did link to your previous posting.  You know, Colin, you could tell us with a comment in this blog that you have something you want us to read. I also read emails sent to me.

Any other reasons for stunned silence?