That would be the Centro Internazionale di Sindonologia 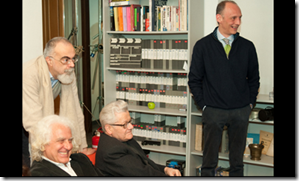 Now, suddenly featured on the home page and listed, undated, on the News page of the Holy Shroud Official Site, is this article:  The experts of the Shroud in the conference from all over the world.  What follows is a Google translation:

Over 300 experts of the Shroud arrived today from France, England, Spain, Peru, Mexico, Brazil, Bolivia to the study conference of the International Centre Sindonologia which was held at the Holy Face. A meeting is not public, but for the members of the Center extended its Italian groups, as well as organizations and research centers from around the world collaborate with the agency in Turin.  "This is our annual meeting – says Professor Bruno Barberis , director of the Center – which normally organize around the feast of the Holy Shroud, set on May 4. " "This time – as set by Sindonologia Center – the focus of debate and action, is not the theme of authenticity the towel. " "The purpose of the meeting – says Professor Barberis – is take stock of the progress of our studies on the Shroud, divided by areas of interest."Some research issues Shroud in particular need of further study, such as the role of ‘ palynological investigation and colors, and the significance of historical research and information on the Shroud.During the work the scholars have been achieved by the archbishop, Monsignor Cesare Nosiglia, papal custodian of the Shroud, which has got to to commend the work. After the meeting they then attended Mass in the Cathedral, celebrated by Monsignor Giuseppe Ghiberti, former president of the Diocesan Commission for the Shroud, and Don Roberto Gottardo, current president of the Diocesan Commission for the Shroud. Finally, the passage before the Shroud for a break of silence and contemplation. "We wanted to take this opportunity Exposition as a ground for closer collaboration – concluded Professor Barberis – Get together around the Shroud confirms the direction of our efforts and represents a moment of great unity. "

The story wasn’t tweeted. Nor was it posted on Facebook. So a big hat tip to Joe Marino for spotting it.

6 thoughts on “The Experts of the Shroud in Conference”