Skeptics have suggested various weird and wonderful ways in which it might have been
produced; they all contradict each other, and none is remotely plausible. 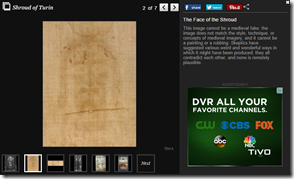 In a 2011 book, British scholar Charles Freeman suggested that the shroud was created for medieval Easter rituals. The earliest mention of the shroud he could find was in 1355, when the cloth was displayed at a chapel in Lirey, France.

“On Easter morning the gospel accounts of the resurrection would be re-enacted with ‘disciples’ acting out a presentation in which they would enter a makeshift tomb and bring out the grave clothes to show that Christ had indeed risen,” Freeman told The Guardian.

Italy’s former royal family, the House of Savoy, acquired the shroud in 1453. Freeman says the family “converted” the cloth “into a high-prestige relic” in order to bolster the kingdom’s reputation.

A caption writer for an accompanying gallery of pictures had a different story to tell:

This image cannot be a medieval fake: the image does not match the style, technique, or concepts of medieval imagery, and it cannot be a painting or a rubbing. Skeptics have suggested various weird and wonderful ways in which it might have been produced; they all contradict each other, and none is remotely plausible.

And there is this caption for a photograph of the frontal full body image:

The Shroud was first photographed in 1898, revealing that it is an astonishingly realistic negative image. This unequivocally proves that the Shroud cannot be a medieval man-made forgery, for no one knew how to produce such an image in those days – or would have wanted to. And no, Leonardo couldn’t have either – apart from anything else, he was born a century after the Shroud is first documented in France.

And this caption for a picture of the Hungarian Pray Codex

Folio 28r of the Pray Codex, a Hungarian manuscript produced between 1192 and 1195, depicting two scenes from the Passion. Most people believe the Shroud is a fake due to the 1988 carbon-dating test, but the botched sampling of the cloth and the last-minute abandonment of agreed-upon procedures mean that the carbon-dating test had severe flaws. Carbon-dating is by no means 100% reliable, and the carbon-dating of ancient cloths appears to be particularly error-prone. Contamination or a medieval repair can account for the problematic Shroud test. This miniature painting, dating from the 1190s, depicts the Shroud, complete with a distinctive pattern of burn-marks, at least a century before the date suggested by the carbon-dating.

3 thoughts on “Charles Freeman and the Huffington Post Caption Writer”