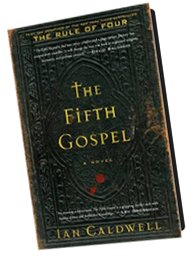 Caldwell’s previous novel, The Rule of Four, was at the top of the New York Times Best Seller list for more than six months. As Dan Brown proved with The Da Vinci Code people believe what they read in novels.

With Nelson DeMille saying, “The Fifth Gospel is nothing short of groundbreaking—a literary feast wrapped around an intriguing murder mystery. Caldwell writes with precision and passion as he takes us on an emotional journey deep into the workings of the Vatican and deeper into the hearts and souls of the men and women who have devoted their lives to the Church. The Fifth Gospel is a cathedral where skeptics and believers alike may enter and all will leave transformed.” …

With Publishers Weekly, Kirkus Reviews and Booklist praising it as much as they do, it is destined for best seller status. Library Journal wrote of it, “Captivating . . . This thriller is, at its heart, a story of sacrifice, forgiveness, and redemption. Peppered with references to real-life people, places, and events, the narrative rings true, taking the reader on an emotional journey nearly two thousand years in the making.”

And so we read why the carbon dating was wrong (remember, this is a novel):

“A fire broke out,” Ugo said. “In 1532, the Shroud was being kept in a reliquary made of silver. The fire melted part of it. A drop of molten silver landed on the Shroud, burning through every layer of the folded cloth. The damaged linen had to be repaired by Poor Clare nuns. Which brings me to my point.”

Nogara plucked a trade journal from a bookshelf and handed it to me. The cover said Thermochimica Acta.

“This coming January,” he continued, “an American chemist from the national laboratory at Los Alamos will publish an article in that scientific journal. A friend at the Pontifical Academy of Sciences sent me an early copy. See for yourself.”

And there it was: “Studies on the Radiocarbon Sample from the Shroud of Turin.”

It contained pictures of what looked like worms on microscope slides, and charts I couldn’t fathom. At the beginning of the text, though, in the abstract, were two sentences whose gist I understood:

Pyrolysis-mass-spectrometry results from the sample area coupled with microscopic and microchemical observations prove that the radiocarbon sample was not part of the original cloth of the Shroud of Turin. The radiocarbon date was thus not valid for determining the true age of the shroud.

“The sample wasn’t part of the Shroud?” I said. “How is that possible?”

Nogara sighed. “We didn’t realize how much work the Poor Clare nuns ad done. We knew they had seven patches over the holes. We didn’t now—because we couldn’t see—that they had also woven threads into the Shroud to strengthen it. Only under a microscope could they be distinguished. So, inadvertently, we tested a fabric that mixed original linen with repair threads. This American chemist is the first to have discovered the mistake. One of his colleagues has told me that parts of the sample weren’t even linen. The nuns made their repairs with cotton.”

A cool energy spread through the room. In Nogara’s eyes was a controlled giddiness.

“Alli,” Simon whispered, “this is it. This is finally it.”

Remember, it is a novel. Maybe novels should be peer reviewed.