goes to Colin Berry for a comment to You cannot fold and unfold a painting (and more). Guess who has been poked.

Would someone care to make me an offer for the GENUINE Mona Lisa? 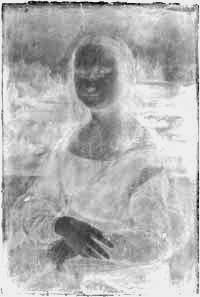 Yes, this is the real one, not that cheap and garish imitation that hangs in the Louvre.

There are three ways you can tell that mine is the original. Firstly, all, and I mean ALL the original paint pigment has fallen off, leaving just a ghost of Da Vinci’s original.

Second, you will note that what remains is a tone-reversed negative. Yes, when pigment detaches from a Da Vinci, one is left with a negative of the original. Not many people know that.

However, the real proof that mine’s the original comes from entering the image into a 3D rendering program: 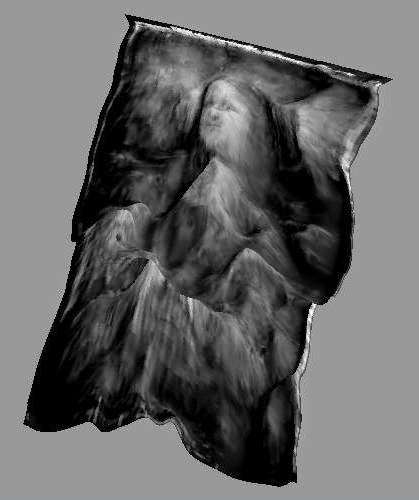 Only a genius of the highest order – Leonardo Da Vinci – centuries, nay millennia ahead of his time – was able to paint an image that degrades to leave a photographic negative with encoded 3D properties.

Message to prospective purchasers: informal ostentations are held nightly at my home, 3, Railway Cuttings, East Cheam. Entrance is free, but viewers are expected to purchase the East Cheam Pilgrim’s Badge, cast in durable epoxy resin for a special reduced price (£35 plus VAT).