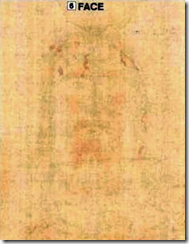 I see you are up with a new posting, Who says the Shroud of Turin image is homogeneous? Think again, fellow shroudies…

Did I read that right? Fellow shroudie?

Here are two images of the TS image, frontal v dorsal,  that I can confidently state that no one apart from myself has ever seen before. In fact, I too had not seen them until a hour or so ago. (One needs to scrutinize them closely).

In a picture caption you ask, “Can you guess the provenance?”

No Colin, I can’t.  I don’t know what you mean by provenance, in this case.  “The shroud”?  The photograph? The film?  The digital file name after conversion from one to the other?  The raw bitmap file?  The JPEG or GIF on a particular website? The original with original size, dots per inch, contrast, brightness, color saturation, etc.? The website where you glommed onto the image?

Every step – object to film, film to digital, file type to file type conversion, resizing and so forth — introduces artifacts including different color approximations in different density areas of the image; or so I’m told. I’m not a graphics expert so correct me, Colin, if I’m wrong.

Anyway, that may or may not be the case here. It would be nice to know what image you are using. For what you are proposing, it would be nice to get a full color image that has had the least possible manipulation in the past.

These two images show in  my humble estimation  that the TS image, whether imprint or painting (I still prefer imprint) is most definitely NOT homogeneous. Under the carefully adjusted contrast, brightness and mid-tone settings,  but emphatically with NO fiddling with colour,  they show some "grey" areas and some "orange-brown" areas, admittedly an approximate description.

Do you know, Colin, what your software does when you fiddle?

And if anyone says it’s "just" blood, I have another image, ready and waiting, to kick that suggestion into the long grass. (Sorry about the idiomatic English – I only use it when animated,  and I have to say that fellow shroudies sometimes get me animated, not to say pissed-off,  with the dismissive put-down tone of their comments).

For now, let’s just content ourselves with the two new images, and hang loose for a while, if only to tease my readers (to say nothing of play for time).

Here’s a challenge to fellow shroudies: whose images were these originally, and where did they first appear, before I began to tinker with them in MS Office Picture Manager (legitimately I maintain). ?  (bolding emphasis mine)

You may have a point, Colin; an important point, perhaps. But you also have an attitude. That may be why we are so dismissive. The stink bomb you threw on what was intended as a thank you posting for the organizers of the St. Louis conference will be remembered for a long time. It is why your comments are being moderated for the time being.

Homogeneous or Not? That’s the Question. It is worth exploring.

24 thoughts on “Homogeneous or Not? That’s the Question”