Charles is a regular and frequent participant in this blog. He has written, The Origins of the Shroud of Turin being published in History Today (Volume: 64 Issue: 11 2014) 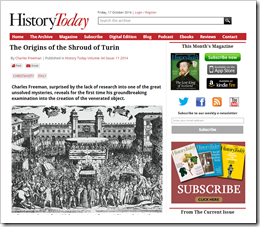 Charles Freeman, surprised by the lack of research into one of the great unsolved mysteries, reveals for the first time his groundbreaking examination into the creation of the venerated object.

When one sees the variety of depictions of the Shroud in the 16th and 17th centuries it is hard to see any other explanation for their vividness than that they were painted on the linen. . . . A study of the depictions of expositions in 1842 and 1868 suggests that serious deterioration of the images set in during the 19th century: it is symbolised by the replacement of the enormous crowds originally able to see the images from afar by the single-file observers of today’s framed Shroud within the cathedral. Each dramatised unfurling would cause the fragmentation of its painted surface, especially when one custom was for the crowds to throw rosaries at it (in the Tempesta engraving the outstretched hands of those awaiting their return can be seen).

While we are left with only the faint images of the original painting it remains an interesting question as to whether any pigments of the original paint still remain on the Shroud. The STURP team, which descended on Turin in 1978 with several tons of imaging equipment, removed a number of samples from different areas of the surface of the cloth with sticky tape, which, remarkably,  they were allowed to take back to the US for examination, without any requirement that they should be returned to Turin (they do not appear to be kept together in a single archive, hampering further research). A furious argument took place when an expert microscopist, Walter McCrone, who was given the tapes to examine, claimed that he had indeed found pigments, vermilion on the bloodstains and red ochre for the main part of the bodies. Although McCrone does not seem to have known this, vermilion is the pigment used to depict blood on other medieval painted linens, while red ochre is ubiquitous as a medieval pigment. McCrone dated the painting to the middle of the 14th century (ten years before the radiocarbon laboratories came to the same conclusion). . . .