Though anti-religious zealots insist religious people hate science, you’d never know it watching dozens of shows on the Shroud of Turin or on ancient archeology or almost anything else. They all have scientists, I saw Science 2.0 fave Phil Plait in one about the Book of Revelation. Those shows are all being watched by religious people who are engaging in confirmation bias, no different than organic food shoppers and political party supporters do. 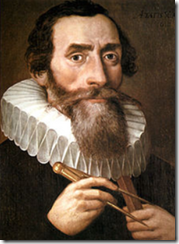 — From the “NOTES:” of an otherwise interesting article, Kepler – Young Earth Creationist by Hank Campbell published this morning in Science 2.0.

So host Neil Tyson tells us about Ussher and then we fast forward to modern geology and how much smarter we are now. Okay, fine, but was Ussher all that wrong for the time? Was anyone doing better? No.  What they leave out is that a legendary scientist was just as wrong.

Like any good scientist, Ussher interpolated from what he had, in this case the Bible and a historical date for the death of the Bablyonian King Nebuchadnezzar II in 562 B.C. Deriving from that, he back-azimuthed generations to arrive at  the exact day that the Earth must have been created in 4004 B.C. "It was a Saturday," Tyson says, with perfect comedic timing.  And completely wrong, as we now know.

Kepler was just as wrong. Mock him? No, he was a scientist. Fair enough. The criticism is of Neil Tyson who really is a great scientist. His bias does show every now and then but this may just be something he didn’t know about. Who did?

The quote, though, was ridiculous.

3 thoughts on “Ridiculous Quote for Today”