I’m with Barrie on this: you should read The Shroud of Turin: Radiation Effects,
Aging  & Image Formation by Ray Rogers. Then decide. 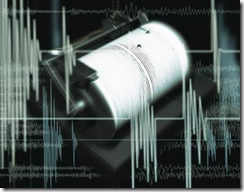 For whatever reason, the recent Maybe-An-Earthquake-Did-It proposal to explain the making of the image and a possible error in the carbon 14 dating of the shroud, awakened an otherwise sleepy news media.  Megan Gannon’s syndicated story in LiveScience, Shroud of Turin: Could Ancient Earthquake Explain Face of Jesus? captured prominent headline placement at Yahoo News. The Telegraph, USA Today, Fox News, the Huffington Post and the Christian Post, for whatever reason, gave the story plenty of ink. Some of the earliest coverage, such as that appearing in The Telegraph, was amateurish yet effective (see Breaking News: Another Day, Another Solution to the Image and the Carbon Dating in this blog two days ago).

However, do notice, most top shelf news outlets are ignoring the story. Dip into the archives and you will discover that the earthquake idea and the radiation idea is old news. Read the paper, Is the Shroud of Turin In Relation to the Old Jerusalem Historical Earthquake? in Meccanica and you’ll find little that is new or anything, really, that rises above the level of speculation.

Nonetheless, traffic on this blog exploded yesterday. My inbox filled up quickly. Barrie Schwortz at STERA, in part due to mail volumes, was prompted to post a special update to shroud.com.  Frankly, from what I have seen so far, I think the story has gotten attention out of all proportions to its real significance. I doubt it has much traction. But we will see.

Here is what Barrie wrote on shroud.com:

Once again, the Shroud of Turin is in the news, this time because of a new paper titled, Is the Shroud of Turin In Relation to the Old Jerusalem Historical Earthquake? just published in the journal Meccanica. Authored by A. Carpinteri, G. Lacidogna and O. Borla, the paper asserts that neutron radiation generated by a major earthquake could have been responsible for the Shroud’s image and could have also modified the cloth in a manner that might have skewed the results of the radiocarbon dating. It has long been our policy not to comment on news releases until the claims they make can be properly evaluated by qualified experts in the related disciplines. However, due to the volume of mail we have been receiving and the fact that the entire paper is readily available online, we decided to make a brief comment on the paper until a more in-depth review can be written by an expert in the field and published in our next regular update.

We should first point out that the idea of radiation creating the image on the Shroud or skewing the radiocarbon dating is not a new one. Over the past few decades it has been proposed by a number of Shroud scholars, including Dr. Jean-Baptiste Rinaudo and Mark Antonacci. After reading the article carefully (and reminding you that this is far from my area of expertise), the only apparent new information it includes is the possibility that the proposed neutron radiation was produced as a by-product of a major earthquake. The authors also provide references to credible evidence that such events can and do occur. However, the issue of radiation and the Shroud was addressed in an article titled, The Shroud of Turin: Radiation Effects, Aging & Image Formation, written by Ray Rogers just before his death and published on Shroud.com posthumously in 2005. Rogers was a chemist at Los Alamos National Laboratory, the head of STURP’s chemistry group and an expert in the effects of radiation on a wide variety of materials. He based his conclusions on examining and comparing a number of irradiated flax samples, including actual fibers of the Shroud. Once again, you will have to read the materials and decide how significant they are for yourself. We hope to have more information on this in our next update.