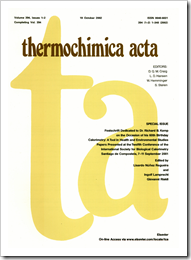 Colin Berry has posted Critique of Rogers’ so-called vanillin clock for dating the Shroud: why was Stanley T.Kosiewicz not a co-author (and where’s the data)? in his blog. Therein he writes:

Some, myself  included, say it [= Studies on the radiocarbon sample from the shroud of Turin by Raymond N. Rogers] should never have been published. Unsentimental, certainly, but science has to be ruthlessly unsentimental, or it would quickly cease to be science.

The same standards should apply to any paper submitted for publication, regardless of what the journal’s referees and editors might know about the paper’s authors, which in the case of Thermochimica Acta would have been a great deal (since  according to his wiki entry Rogers was both a founder and long-term editor of the journal).

There may be a lesson in how writing for clarity in this.  One might mistakenly think Rogers was the long-term editor when the paper was submitted in April of 2004, One might even think he was still editor, when after months of peer review, the paper was accepted in September of 2004 and finally published in 2005.  Here is a paragraph from Wikipedia article Colin cites (it would not have been too much to include it or at least include the last sentence).

During his career Rogers published over forty peer-reviewed papers on chemistry. In 1981 he was named Laboratory Fellow at Los Alamos National Laboratory. Other honors included being named a Tour Speaker for the American Chemical Society in 1971, the Los Alamos National Laboratory, Distinguished Performance Award in 1984 and the Department of the Air Force Exceptional Civilian Service Medal in 1991. He also served as the editor for Energetic Materials, a peer-reviewed scientific journal from 1983-1988. He was also on the editorial board of Thermochimica Acta from the first issue of this journal in 1970 (also the very first paper published in the first issue of this journal is authored by him) until his retirement in 1988.

He had not served on the editorial board since 1988. That was how many years before he submitted the article. And I don’t see where he was the long-term editor. Where did that come from?

Does Colin agree, then, that the following is a problem, given his constant defense of the scientists involved in the carbon dating in 1988. Quoting from a paper by Mark Oxley:

In late 2010 the scientific journal Radiocarbon published a paper entitled “Investigating a Dated Piece of the Shroud of Turin” by Prof Timothy Jull of the University of Arizona and Rachel Freer-Waters. In this paper they described how they had microscopically examined a sample cut from the Shroud of Turin and found no evidence for any contamination, particularly in the form of coatings or dyeing, in the material of the sample. They concluded that they could find no reason to dispute the original carbon-14 measurements which, in 1988, had shown the Shroud to be dated between 1260 and 1390.

Radiocarbon is peer-reviewed. Jull was editor of the journal when his article was published. One must wonder, did he pick the peers? Did he review and respond to the peers as the author of his paper or as the editor of the journal? I had raised these questions. I was not concerned about Rogers when I wrote this because he was no longer on the editorial review board; it had been several years. But Jull, in my mind, was a different issue.

Colin  wrote, “[S]cience has to be ruthlessly unsentimental.” While those weren’t my words, it was what I thought. Paolo Di Lazzaro disagreed with me. He defended Jull on this issue when he wrote:

It isn’t the first time that an Editor is co-author of a paper submitted to its own journal. And usually the (formal) problem is easily solved by a blind review procedure.

As an example, I faced a similar spot when I submitted two papers for publication in the Proceeding volume of IWSAI (International Workshop on the Scientific approach to the Acheiropoietos images). I was co-author of two papers and at the same time editor of the Proceedings and responsible for the choice of the Referees.

I solved this problem asking to a colleague to manage the review procedure: select the Referees, receive from each Referee the anonymous review, and send me the same reviews. She received my reply and the corrected paper and she sent it to the Referees for the final response.

In summary, there are simple rules to avoid a conflict of interest. It is likely Jull followed the same method.

A friend of mine, a chemist with a major corporation, also corrected me. In specialized fields, he explained, recognized experts are often called upon to serve as editors or on editorial committees of journals for which there are few or no competitive journals. Scientists picked for editorship and committees are among the best in their fields. Thus they are the same people most likely to publish often. And publish they do and they do so in “their” journals. It would be ridiculous and unscientific to deny them the opportunity to do so or to force them to publish in lesser journals. Check it out. The best scientists serve the best journals and they do ethically. They are in those positions because in addition to being talented they are trusted. The criticism, mine at the time, is without merit.

I learned from this. I hope that Colin reevaluates his position. He is widely published as a chemist and he may want to check with some publications with which he is familiar. This would be a valuable contribution to everyone’s understanding of the peer review process.