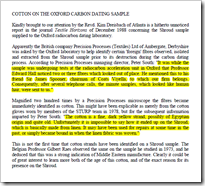 There was this from Hugh Farey (as a comment):

. . .  “Villarreal revealed that, during testing at the lab, one of the threads came apart in the middle forming two separate pieces.Surprisingly, the two ends of the thread had different chemical compositions, lending credence to the theory that the threads were spliced together during a repair.” I don’t know where this idea came from. The 2008 Ohio paper by VillarreaI I have in front of me says that after Rogers had found what he thought was a splice of two different materials, Villarreal found that in fact both ends were cotton. Disappointed by this result, Benford and Schwotz sent him two more threads, and they were both cotton too.

Thibault Heimburger responded with a link to a paper he wrote. It is in three parts: Part 1, Part 2, Part 3. Hugh continued to dialog:

A brilliant paper, Thibault, as I might have expected. However

The picture of the “broken splice,” is not a splice. Not in any way I interpret the term splice anyway. The ‘broken’ end is far too tight to be part of a thread that has been joined together by some sort of interweaving of unravelled fibres. It looks more as if the two ends were simply butted together and glued with that “crust” which, surprisingly, is wholly invisible on the picture of the intact thread, and which, in spite of being a completely different colour, Rogers missed. Whichever it is, however, there is no known method of invisible repair which uses such a splice/join as a way of adding its repair material, and it is difficult to envision any reason why anybody should want to.

I understand your point about the discrepancy between the FTIR findings (cotton), and your observations (linen mixed with cotton), but am not convinced that all or even most of the Raes and/or C14 sample was made of these interpolated fibres, of whatever material. And that, I guess, is the heart of the matter. I feel certain that the extent of any interpolated material would be visible in the area immediately surrounding the C14 sample on a sufficiently high-resolution photo.

Then there is this that just arrived from John Klotz: