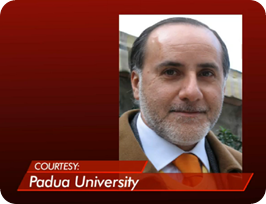 Barrie Schwortz has an excellent article on th new book by Giulio Fanti (pictured right). Picking up part ways in (it’s the first story for Late Breaking News for March 28):

So why all the controversy? The book apparently documents the recent Shroud testing done by Fanti and his research team at the University of Padua and reports the results of some chemical and mechanical tests they performed which they claim "confirms that the Shroud dates back to the 1st century." A pretty powerful statement for sure, but that is not the major problem. You can find a more detailed report about their research on the Vatican Insider website (in English). Here is an excerpt from their article:

"The research includes three new tests, two chemical ones and one mechanical one. The first two were carried out with an FT-IR system, one using infra-red light and the other using Raman spectroscopy. The third was a multi-parametric mechanical test based on five different mechanical parameters linked to the voltage of the wire. The machine used to examine the Shroud’s fibres and test traction, allowed researchers to examine tiny fibres alongside about twenty samples of cloth dated between 3000 BC and 2000 AD.
"Final results show that the Shroud fibres examined produced the following dates, all of which are 95% certain and centuries away from the medieval dating obtained with Carbon-14 testing in 1988: the dates given to the Shroud after FT-IR testing, is 300 BC ±400, 200 BC ±500 after Raman testing and 400 AD ±400 after multi-parametric mechanical testing. The average of all three dates is 33 BC ±250 years.
"The tests were carried out using tiny fibres of material extracted from the Shroud by micro-analyst Giovanni Riggi di Numana who passed away in 2008 but had participated in the1988 research project and gave the material to Fanti through the cultural institute Fondazione 3M."

That last paragraph goes to the core of the controversy. In a separate Vatican Insider article (in Italian – use Google or Bing to translate the page) was the following statement from Mgr. Cesare Nosiglia, the Archbishop of Turin (via auto translation with some additional corrections):

"Yesterday, a note from the Turin International Centre for Sindonology and the Archbishop of Turin, Mgr. Cesare Nosiglia, put stakes in the work of Fanti. No serious’ ‘value” of the results can be attributed to any of the research on the Shroud reported in the book, said the Papal Custodian of the Shroud of Turin, Archbishop Cesare Nosiglia. ”Since there is no degree of safety on the authenticity of the materials on which these experiments were carried out to the Shroud cloth – reads a note of Monsignor Nosiglia – the owners and custodians cannot recognize any serious value to the results of these alleged experiments.”"

The article goes on to include Fanti’s reply to the allegations that the samples he used were invalid. In part, he states (with some additional corrections):

"In short, there were samples taken of Shroud material in both 1978 and in 1988. In both cases, they were approved by the Custodian of the Shroud, Archbishop (later Cardinal) Anastasio Ballestrero, with the consent of the owner, Umberto II of Savoy in 1978, and Pope John Paul II in 1988. Involved with the Shroud for a long time, prof. Fanti received some fibers taken from the Shroud in 1978 by prof. Ray Rogers, one of the American scientists of the STURP team.
"But in 1988, Giovanni Riggi di Numana, the expert who cut the Shroud samples for examination by C14, and with the agreement of Cardinal Ballestrero, kept some of the fibers of the Shroud and collected fragments of aspirated blood and dust samples in between the linen and the Holland cloth. The conditional is a must, as no record was drawn up of the levy for the C14, let alone a semi-official collection like that. But it is very likely that after the death of Riggi, in 2008, a part of the material held by a dedicated foundation has come to Fanti. After the death of Ballestrero, card. Saldarini issued a statement, asking that any Shroud materials be returned. But it seems that no one has complied with the request.
"All of this to conclude: prof. Fanti’s research was carried out on the Shroud and of course the material was authentic, even if it was outside the control of the International Centre of Sindonology. And besides, 25 years after the C14 examination, whose own credibility Fanti’s work further crumbles, perhaps one might begin to assume that a continuation should be considered of the research program created by STURP, the Shroud of Turin Research Project, an international group of scientists who produced a wealth of incredible scientific results after testing the Shroud in 1978.

But will that remain the biggest issue?

33 thoughts on “Barrie Schwortz: Biggest issue so far seems to be the validity of Fanti’s samples”