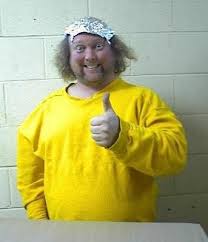 And you thought the Grey Aliens fans had strange ideas. Thursday, May 5 2011: Today on The ‘X’ Zone with Rob McConnell. Be sure to wear your tinfoil hat and activate your secret decoder ring.

SEGMENT 2: 11 pm – 12 am Eastern / 8 pm – 9 pm PacificMICHAEL MULLEN – War of the Angels – In 1976, Michael Mullen was writing a book about the horrendous sinking of the U.S.S. Indianapolis, based upon Top Secret papers released to him by President Gerald Ford. Every major publishing house in America clamored for his book, when suddenly, Mullen was visited by the Man on the Burial Shroud of Turin who told him, "Do not write that (U.S.S. Indianapolis). Write this (War of the Angels)." Scientists who proclaim the Shroud of Turin to be a fake are critically wrong. Not only is it the burial shroud of a man crucified 2000 years ago in Jerusalem, but that same man whose image is embedded on the cloth is still alive. Mullen was escorted by him numerous times to a vast Dark World. There he beheld angels from opposing forces battle. The Man on the Shroud told Mullen to write what he saw. Through the author”s eyes you will: See the face and body of Jesus Christ See the face and body of the Dragon (Satan) See the "Living" Star of Bethlehem Patrol the celestial heavens with Archangel Michael Battle Satan and his armies of dark angels Visit the Bottomless Pit and its gruesome inhabitants Discover who murdered Pope John Paul I Learn who is paving the way for Satan”s return See Michael shout the start of World War III Be raptured to a Cloud World Witness Satan being cast into hell World Leaders prepare for the Antichrist, and to succeed, they make you believe that Satan is just a cartoon character in a funny red suit. But his existence is no joke. War of the Angels was written as commanded by the Man on the Shroud of Turin. It is a final warning. Take heed. – www.warofangels.com

And if this doesn’t convince you to voluntarily commit yourself, listen to the next hour:

SEGMENT 3: 12 am – 01 am Eastern / 9 pm – 10 pm PacificGLEN JACOBS – The Rant of Glenn – U. S. Kills bin Laden – Monday, 2 May — very big headlines. . . . PLAN D: The last any American saw Osama bin Laden was years before the aircraft thing. He was dying of kidney failure in an American hospital in the Middle East. He was an "asset" of the CIA. He would not have figured at all in the "9/11" attack. PLAN E: The American commando team certainly killed someone, and no doubt someone important to the enemy, but we don’t know who. Now that the official government version is that Osama bin Laden was among the dead, all the lips will be locked and all the documents will be classified and we will never know. . . .  PLAN H: There were no Arabs nor Muslims (specifically not Osama bin Laden) involved in the 9/11 action. Some outfit built a transponder and stole the codes — and flew the planes by remote control into buildings pre-wired with explosive charges.

3 thoughts on “Are there enough tinfoil hats to go around? It gets nuttier every minute.”