For “scientific approach to the Shroud” is usually understood that according to which the Shroud is regarded solely as an object of study and for which the only important issue is to try to answer the questions about the origin and the authenticity of the Shroud. A “pastoral approach to the Shroud” means the reading of the Shroud in the light of its intrinsic message that, starting from its close and indisputable relationship with the Holy Scriptures, becomes a valuable and unique inspirer of the life of faith and the prompter of those works of charity which are its real big fruit. In this regard at the end of his aforementioned speech in front of the Shroud on May 24, 1998 Saint John Paul II said: “May the Spirit of God, who dwells in our hearts, instill in every one the desire and generosity necessary for accepting the Shroud’s message and for making it the decisive inspiration of our lives”.

Therefore to put in antithesis the scientific approach to the religious one is very dangerous because you run the risk on one hand to reduce the Shroud to a “dead object”, to an image that has meaning only in itself and that doesn’t at all challenge our lives and on the other to turn the Shroud into a kind of idol slaved to a priori and instrumental theses. I am deeply convinced that to leave the presentation of the Shroud to a sole scientific approach or to a sole pastoral approach is neither correct nor useful for any kind of recipient. But then are these two ways of approaching the image of the Shroud really antithetic?

— Bruno Barberis
Associate Professor of Mathematical Physics, University of Turin &
Director of the International Center of Sindonology of Turin
from “Shroud, Science And Faith: Dialogue Or Conflict?”
a paper he recently presented at the St. Louis Shroud Conference 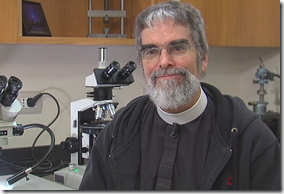 Br. Guy Consolmagno SJ is an astronomer at the Vatican Observatory and president of the Vatican Observatory Foundation. A native of Detroit, Michigan, he has two degrees in planetary sciences from MIT and a doctorate from the University of Arizona. He is a past president of the IAU Commission 16 (Moons and Planets) and past chair of the American Astronomical Society Division for Planetary Sciences (AAS/DPS). Along with more than 200 scientific works, he is the author of six popular astronomy books (most notably Turn Left at Orion, with Dan Davis, and Would You Baptize an Extraterrestrial? with Paul Mueller) and the winner of the 2014 Carl Sagan Medal for Public Outreach from the AAS/DPS.

He has put together an interesting posting for the HuffPo blog: Science, Religion and the Assumptions We Make.  He concludes (but do read it from the top)

I believe that the physical universe we study was was made deliberately by God who found it good — and who makes Himself known in the things He created (to quote St. Paul). Thus scientific truth is a pathway to God. Even a scientist who denies the existence of any creator God must nonetheless worship at the altar of Truth, or else that science is worthless.

And why, at the end of the day, do I choose one religion over another? I can accept that all religions ultimately are looking for the same God. But I suspect that some religions do a better job of it than others… just as Newton’s physics was an improvement over the medieval view, and quantum physics picks up where Newton’s version fails. The religions of The Book — Judaism, Christianity, Islam — all recognize a God outside of nature who created this universe and found it good. Of these, I adopt the Catholic view because to me it is the most complete, most coherent vision of God and God’s interaction with our universe.

I find that my religion’s understanding of the universe is consistent with everything that I observe about life: not only in science, but in my experience of beauty, love and all the other transcendentals that science does not treat… including those experiences that I interpret as prayer, my direct experience of God.

It’s not a proof. But it is a consistency argument. Your mileage may vary.

And one of those things may be the shroud. 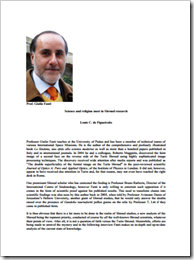 Louis wrote in a comment in the posting, Bari Conference: A scientific event unprecedented in Puglia:

. . . Professor Giulio Fanti told me that the corona discharge was possibly connected to ball lightning.

This interview-article was posted on the Holy Shroud Guild website but at my request my folder was deleted, for reasons that will soon be made known by me. I am sending it to Dan in pdf format, who can upload it if he wishes to do so. I can understand the pressure he faces. Welcome to the world of Shroud studies!

The two ways of understanding the Shroud are of course often met and clashed, sometimes dividing both the insiders and the common people: Shroud object of faith and worship or object of scientific interest and study? It has grown so much animated discussions, perhaps as never before, favored both by modern means of communication and by the great worldwide interest aroused by the last expositions. But are the two ways of relating to the image really in contrast? The thoughts of many scholars have shown that they can very well coexist as long as their different levels of competence are respected and it is avoided to mix them at all costs forcing conclusions without respecting its peculiarities.

And history?  And art?  Consider the recent and ongoing discussions about the Pray Manuscript.