Jeanna Bryner, the Managing Editor of LiveScience is reporting that the ‘Last Supper’ Papyrus May Be One of Oldest Christian Charms:

A 1,500-year-old fragment of Greek papyrus with writing that refers to the biblical Last Supper and "manna from heaven" may be one of the oldest Christian amulets, say researchers.

The fragment was likely folded up and worn inside a locket or pendant as a sort of protective charm, according to Roberta Mazza, who spotted the papyrus while looking through thousands of papyri kept in the library vault at the John Rylands Research Institute at the University of Manchester in the United Kingdom.

"This is an important and unexpected discovery as it’s one of the first recorded documents to use magic in the Christian context and the first charm ever found to refer to the Eucharist — the Last Supper — as the manna of the Old Testament," Mazza said in a statement. The fragment likely originated in a town in Egypt. [Proof of Jesus Christ?

The translated text from the article reads:

Fear you all who rule over the earth.

Know you nations and peoples that Christ is our God.

For he spoke and they came to being, he commanded and they were created; he put everything under our feet and delivered us from the wish of our enemies.

Our God prepared a sacred table in the desert for the people and gave manna of the new covenant to eat, the Lord’s immortal body and the blood of Christ poured for us in remission of sins.

Unrelatedly, the editor threw in a link to past LiveScience stories: Proof of Jesus Christ? 7 Pieces of Evidence Debated. The first one is Biblical Blankets. Guess what? 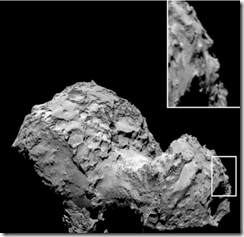 In a LiveScience article Man in the Comet: Why We See Faces Everywhere we read:

Though the face on the comet, with its shadowy profile, looks almost sinister, it is far from unique: Humans are wired to see faces everywhere.

In fact, the phenomenon is so common that it even has a name: Pareidolia, which in Greek means, in essence, "faulty image."

"Your brain is constantly trying to make the most out of just the tiniest thing," said David Huber, a psychologist at the University of Massachusetts Amherst, who has studied the phenomenon. "You’re sort of in overdrive on imagining from limited information that there is a face."

From the Shroud of Turin, thought to carry the imprint of the crucified Jesus’ face and body, to faces in the clouds and the Virgin Mary on a grilled cheese sandwich, people have always seen faces in everyday objects. Even the faintest hint of eyes, nose and a mouth in roughly the right places will often trigger the brain’s facial recognition system, Huber said.

When people see faces in images, a brain area called the fusiform face region lights up in brain scans, said Kang Lee, a developmental neuroscientist at the University of Toronto, in Canada, who has worked with Huber on several studies of how people process faces.

This brain region is likely a key junction point where low-level visual information is processed to say "Aha! It’s a face," Huber said.

The distance between facial features seems to play a key role in the brain’s ability to spot and uniquely identify different faces.

As I pointed out back in December of 2012, LiveScience carried this bit of insanity then and that posting was called LiveScience Goofs Again:

A prime example of pareidolia and its connection to religious images is the Shroud of Turin, a cloth bearing the image of a man — which some believe to be Jesus — who appears to have suffered trauma consistent with crucifixion. The negative image was first observed in 1898, on the reverse photographic plate of amateur photographer Secondo Pia, who was allowed to photograph it while it was being exhibited in the Turin Cathedral.

Are there no editors at this magazine? In the three short paragraphs just above the paragraph I just quoted, Zimmermann very correctly and very clearly defined pareidolia as follows: 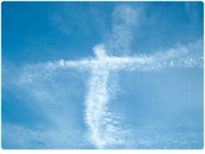 The psychological phenomenon that causes some people to see or hear a vague or random image or sound as something significant is known as pareidolia (par-i-DOH-lee-a).

The word is derived from the Greek words para, meaning something faulty, wrong, instead of, and the noun eidōlon, meaning image, form or shape. Pareidolia is a type of apophenia, which is a more generalized term for seeing patterns in random data.

Some common examples are seeing a likeness of Jesus in the clouds or an image of a man on the surface of the moon.

The picture of a man on the Shroud of Turin is not at all mere random data. It is unmistakably a picture of a man. It might be a yet unexplained work of art. It might even be a photograph by Leonardo da Vinci.  (Humor me, I’m just trying to make a point). It might be the product of some natural phenomenon. Or it might be a miraculous acheiropoieton, an image not created by human hands. But it is not a pattern of random data that just so happens to look like a man. That would be so extraordinary and so statistically implausible as to be truly miraculous. It is not a pareidolia.

Whatever anyone may think about the shroud’s authenticity, there is one thing everyone should agree about: the image of a man with a well-featured face on the shroud is not a pareidolia.  Here is a handy search of this blog on the subject.