"He who the third day rose from the dead was no less true
God in the manger than on the cross."  — Karl Barth 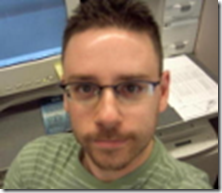 The short quote from inside a longer quote reads:

In sum, we can say that it’s not the body image on the Shroud but the cloth itself that is the real material sign of Jesus’ Resurrection!

The longer, embracing quotation is from a new paper, An image that speaks of the Incarnation well before it speaks about the Resurrection by Yannick Clément (It makes me wonder if Yannick gets his progressive thinking from Barth):

Because every characteristic related to the Shroud image can find some similarity in nature and, even more, because some of those characteristics (like the discontinuous distribution and the very superficial aspect of the image) really seem to strongly suggest that the image on the cloth has been formed by a natural interaction between the crucified dead body and the surface of his burial cloth, seeing this image as some kind of material proof of his Resurrection is presently only possible through faith and consequently, such a concept cannot be based on a real scientific and rational reflection. But having said that, it’s important to note that it is truly possible, through rationality, to see the Shroud (not only the body image on the cloth, but the burial cloth itself, along with the body imprint and the bloodstains present on it) as a material sign (not a proof!) of the Resurrection of Christ, in the sense that it has been proven that the cloth contained, only for a short period of time (i.e. less than 72 hours), the real crucified body of a man who presents all the bloody stigmata of Christ, as described in the Gospels, while the extraction of his body from the Shroud did not seem to have disturbed the bloodstains, broken the linen fibrils under them or disturbed the body image in any way, which can be seen as possible signs (not proofs) of a “dematerialization” (or a “spiritualization” if you prefer) of his body at the moment of the resurrection. Also, and this is probably even more important, the simple fact that such a gruesome burial cloth of a crucified criminal (which shows the complete body image of a nude “Christ”, along with lots of bloodstains) has been taken out of the tomb, quietly kept and carefully preserved for centuries after his dead body has only spent a short period of time in it, can truly be seen as the greatest material sign of the Resurrection of Christ that exists. In sum, we can say that it’s not the body image on the Shroud but the cloth itself that is the real material sign of Jesus’ Resurrection! Effectively, if this cloth would have been the burial shroud of an anonymous crucified man, why in the world would such a grave cloth have been taken out of the tomb and well preserved until now?

Nevertheless, it’s important to emphasize the fact that this sign remains an indirect sign of this event, instead of being a direct proof of it, like it is researched by many people today who really want to see a clear physical proof of Resurrection in the body image of a dead Jesus that is present on the cloth.

(emphasis mine, this is from a note in the paper, note references are removed in the blog and should be noticed and read in the paper)

This is one of two new papers from Yannick published at the iSEAM site. The other will be discussed shortly. Hat tip to Andy.