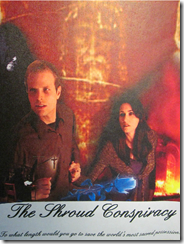 I reported on this back in May of last year in The Shroud–The Movie. The update is that the release date for the movie, “The Shroud Conspiracy,” is now Springtime of 2015. The movie is based on the novel "The Image and The Rose"  by John C. Iannone (screenwriter: John C. Iannone, Producer: Nicole Abisinio – Gabriel Messenger Films – Florida).

The plot (some of it) according to the film company’s website:

Turin, Italy:   Under cover of darkness, two figures elude security and break into the Cathedral of  St. John the Baptist, home of the ancient burial cloth of Jesus. They shoot a Custodian and approach the reliquary containing the Shroud planting an incendiary device.  A few yards away In the adjacent Royal Palace, the Secretary General of the United Nations approaches the podium to address European dignitaries on the War in Albania.
Minutes later an intense explosion in the Cathedral lights up the night sky, destroying the reliquary housing the Holy Shroud. The blast blows out windows in the Royal Palace Dining Room, injuring the Secretary General. CIA Agent Rebecca Ross runs to his aid and takes charge of the scene. Across from the Cathedral, a mysterious man in dark robes lurks in the shadows watching. He bows his head and whispers, "It is done!"

Archaeologist James Aiello, working a thousand miles away, explores the West Gate of the ancient walls of Edessa, Turkey, seeking the one-time 500 year home of the Holy Shroud. Suddenly his trusted aide Abdul rushes to him breathless: "Mr. James! Come! A bomb in the Cathedral. The Shroud is gone! May Allah forgive!"

James feels a sickening emptiness. A world scholar on the Shroud, he worked with the scientific team demonstrating the linen to be authentic – a priceless historical  treasure to millions of people. He stands in disbelief…speechless. Suddenly, his cell phone rings. It is Brother Tom, a Monk and life-long friend in the Vatican Library in Rome. . . .