O.K. commented in my posting, The Myth of the VP8 and 3D Uniqueness?

A lot of confusion is there. It is perhaps because the common way of lecturing about the Shroud, is a historical approach, in 1898 Pia discovered negativity, in 1970s Jackson & Jumper discovered 3D with VP-8 etc.

This is actually misleading, creates a hype, and in my opinion asks the wrong questions. How to make an image that is a photographic negative, 3 D rendering, without contours, isotropic, etc. ? There is always a way to do it regarding the individual properties -but resulting images have actually nothing in common with the Shroud (besides this single selected characteristic).

In my opinion, the issue should be lectured in more modern, compact way? The problem is: what constitutes the image on the Shroud, what makes it so specific? What are its basic components? And ONLY THEN ask a question: what are derived properties (like negativity or 3D) of such an image.

O.K. may be right. It is certainly a form of discipline that might eliminate the confusion. But the problem is bigger than that.  It’s the “Wild West” nature of shroud research since STURP, a land of scientific lawlessness and tall tales where the closest things to order were the “O.K. Corral” shootouts called conferences.  What did this atmosphere produce?

It produced the “I think I see” world of imagined images of ancient coins along with all manner of bric-a-brac, of plants from ancient Israel, of teeth and ponytails and of written messages in Greek, Latin or Hebrew — all these being wishful misperceptions or pareidolia. There were the dubious pollen charts and the radiocarbon dating fiasco. There were the tall tales: NASA analyzed the shroud, Ray Rogers was a general in the Air Force, America’s greatest scientists studied the shroud, and so-and-so was a Nobel prize-winning physicist. And it produced a lot of good science, too. Often that was overshadowed by the sensational.

There were short declarative decrees. They’re still sitting out there at shroud.com:

This spatial data encoded into the image actually eliminates photography and painting as the possible mechanism for its creation and allows us to conclude that the image was formed while the cloth was draped over an actual human body.

We can examine this in three parts:

spatial data encoded into the image:   Is calling the data spatial not begging the question? Would it not be better to say relative greyscale values of the image that when plotted as relative distances from a planar surface suggest three-dimensionality, suggest spatiality.

eliminates photography and painting as the possible mechanism for its creation:  That is simply not true, as has been shown on on this blog. One might argue about how difficult or unlikely it would be. But a blanket denial that it is possible is misleading, at best.

Being precise makes it more difficult to read. But compact imprecision leads to misunderstanding and to the dogmatism. 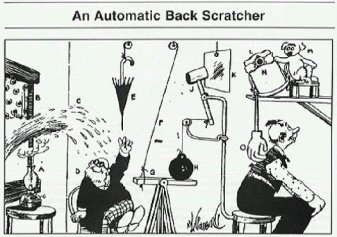 And then there is the Wild West’s Colorado Springs, once a place to soak in curative waters, and then a place to pan for gold, and now the home of the Turin Shroud Center of Colorado. Here is a brief statement from a document, The Shroud of Turin – A Critical Summary of Observations, Data and Hypotheses on the TSC website. I call this the Rube Goldberg miracle; you know, where a miracle happens, that causes a body to become mechanically transparent allowing a cloth to fall through it and get a controlled dose of radiation.

I was just wondering:  what is the body like at this stage of the miracle?  Is it a liquid that holds it’s once-solid shape or a gas or something specifically miraculous? Does the part of the cloth under the body fall upwards?  What type of radiation works best for resurrection miracles?  What happens after the cloth has finished its fall?  Is a mechanically transparent body able to pass through locked doors yet walk on the road to Emmaus and eat fish?

Those are the questions that come to mind. Silly, perhaps, but they do come to mind. Let me put it this way: I cannot begin to imagine that I will ever believe this.  I believe in the Resurrection and I may believe the shroud is real but I cannot believe one word of Fall-Through hypothesis.

If you haven’t read The Resurrection is Just Too Mysterious to Be Described & A Response to Dr. Colin Berry, you can’t understand where I’m coming from.

16 thoughts on “The O.K. Corral Shootout”