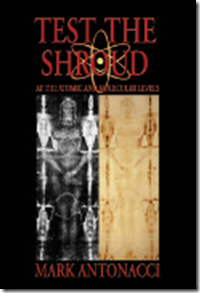 Mark Antonacci just sent me a press release for his newest book, Test the Shroud. A copy is included below.

A page on Mark’s website, Books by Mark, provides a summary and two reviews, one by Giulio Fanti and one by Joe Marino. There is also a PayPal button on the page allowing you to order a copy. Here is what the page says:

Mark Antonacci makes compelling arguments about many prominent points in Test the Shroud.  His accurate description of all the unique features on the Shroud of Turin allows him to convincingly argue that this is the authentic burial cloth of Jesus Christ.  He presents a very testable hypothesis that particle radiation emanating from the dead, crucified body wrapped within this burial cloth caused its unprecedented, full-length body images, its still-red blood marks, its erroneous carbon dating and so many other unforgeable features.  He even describes advanced scientific testing techniques that could be applied to this burial cloth and its human bloodstains that could demonstrate whether a miraculous event actually occurred; when it happened; where it happened; the actual age of the burial cloth and its bloodstains, and the identity of the victim.

He contends that we live in a singular moment of history.  These new scientific test results combined with previous unparalled (sic) evidence would prove that the passion, crucifixion, death, burial and resurrection of Jesus Christ were actual events in history.

Giulio Fanti, Associate Professor of Mechanical and Thermal Measurement, University of Padua, Italy – This book gives a wide overview of the Shroud of Turin furnishing many interesting details of the most important relic of Christianity, both from the scientific and historical points of view, while reporting results from studies of many scholars.  After clarifying why the body image is not scientifically explainable, nor technically repeoducible (sic), Antonacci furnishes an hypothesis how it could have been formed, based on particle radiation capable, according to him, of explaining both the image we see on the relic and the C-14 enrichment that produced a medieval date during the 1988 radiocarbon dating.

Joe Marino, Theologin (sic), Sindinologist (sic) – Test the Shroud is a gold mine of information on the controversial Shroud of Turin.  Antonacci has followed up his 2000 book, The Resurrection of the Shroud, with another scholarly work that is also written with the non-scholar in mind.  Heavily footnoted and lavishly illustrated, Antonacci, with the detailed eyes of an attorney, covers all aspects of the study of the Shroud, including history, theology and science.  The author is petitioning the Vatican to allow new scientific examinations that will test all the latest hypotheses regarding image-formation and problems with C-14 dating.

The home page on Mark’s site adds this information:

This book even lays out a series of sophisticated testing that could be performed on the Shroud linen and blood marks and on limestone from Jesus’ reputed burial tombs.  This testing would provide countless more items of information yet to be acquired from this cloth.  This testing could provide millions of items of unfakable (sic) evidence that would prove that:

Note:  I normally don’t do sics.  It is snarky and besides I make such mistakes all the time in this blog.  But this was too much. I got carried away.  Google tells me, in 0.24 seconds, that unparalleled is used 36,800,000 times on the world wide web.  Even so, unparalled, the incorrect spelling, is used 408,000 times. And Edgar Allan Poe misspelled the word in a book title, so they say. So I can forgive unparalled. But who can forgive Sindinologist?

Mark sent the press release as an inline, scrunched down, fuzzy image file of an otherwise normal page. I can’t find a better copy anywhere on the Internet, even on Mark’s Test the Shroud website.  I didn’t want to delay getting it to you, so I trimmed the page margins and put it below. 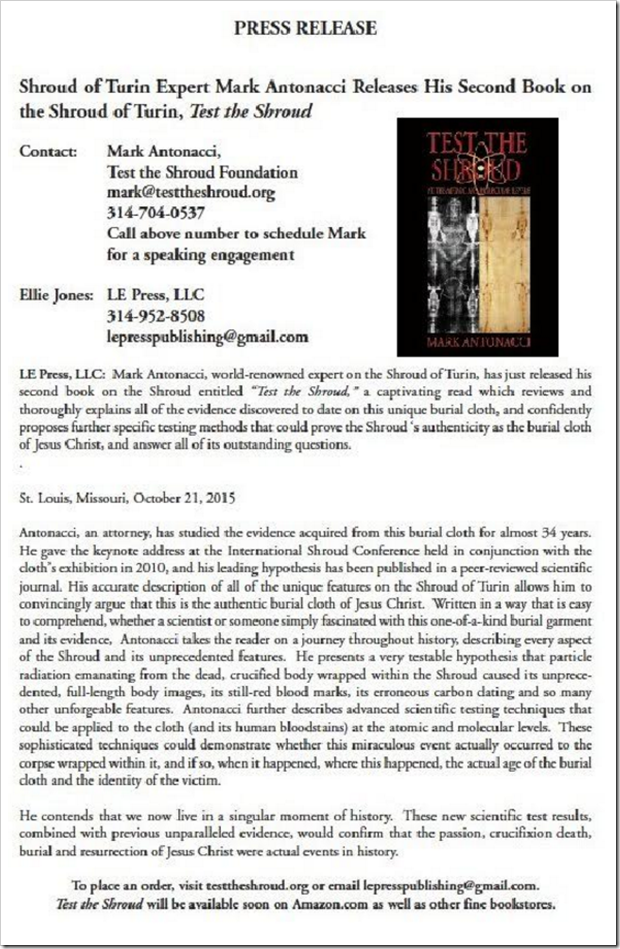 5 thoughts on “New Book by Mark Antonacci is Available”