Such diversity does not exclude a Medieval origin in Europe but it would be also compatible with the historic path followed by the Turin Shroud during its presumed journey from the Near East. Furthermore, the results raise the possibility of an Indian manufacture of the linen cloth.

… two papers have highlighted some concerns about [… the radiocarbon measurements] determination, and a Medieval age does not appear to be compatible with the production technology of the linen nor with the chemistry of fibers obtained directly from the main part of the cloth in 1978.

The Turin Shroud is traditionally considered to be the burial cloth in which the body of Jesus Christ was wrapped after his death approximately 2000 years ago. Here, we report the main findings from the analysis of genomic DNA extracted from dust particles vacuumed from parts of the body image and the lateral edge used for radiocarbon dating. Several plant taxa native to the Mediterranean area were identified as well as species with a primary center of origin in Asia, the Middle East or the Americas but introduced in a historical interval later than the Medieval period. Regarding human mitogenome lineages, our analyses detected sequences from multiple subjects of different ethnic origins, which clustered into a number of Western Eurasian haplogroups, including some known to be typical of Western Europe, the Near East, the Arabian Peninsula and the Indian sub-continent. Such diversity does not exclude a Medieval origin in Europe but it would be also compatible with the historic path followed by the Turin Shroud during its presumed journey from the Near East. Furthermore, the results raise the possibility of an Indian manufacture of the linen cloth. 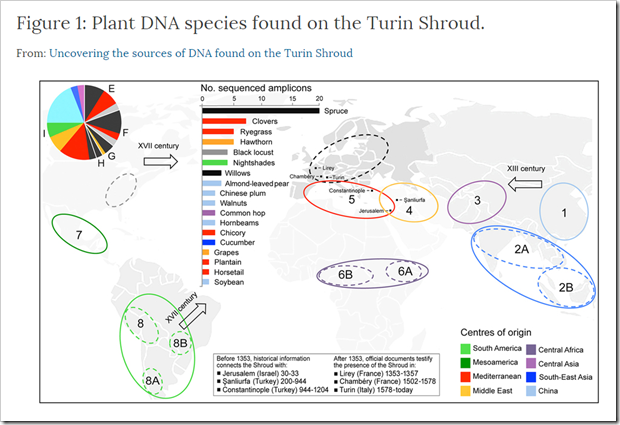 43 thoughts on “Breaking News: Sources of DNA on the Shroud of Turin”