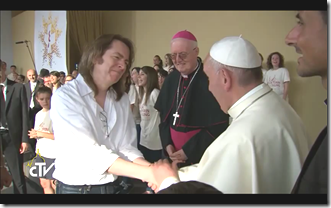 (Syracuse, NY) Bob Halligan Jr., the founder and lead singer for the International Catholic Celtic rock group, Ceili Rain, was invited to Turin Italy to perform his original music for a Papal gathering of over 100,000 attendees. Pope Francis was in Turin to view and venerate the Shroud of Turin, celebrate a Papal Mass and to meet with and address the gathered faithful. Mr. Halligan was the only American music artist invited to perform for the events surrounding the Pope’s visit.

Halligan, an award winning music veteran and Syracuse, New York resident considers himself to be “a radically serious Catholic and a huge fan of this Pope” and thus views this whole experience as “one of the greatest blessings of my life.”

As with all large Papal gatherings, there are many activities and events scheduled in advance of and during the Pope’s arrival. The singer received an invitation from the organizers to perform a Ceili Rain song for 10,000 people gathered in Turin’s Area Vitali for Eucharistic Adoration June 20, and for some 100,000 gathered in Piazza Vittorio the following day for the Pope’s arrival. The experience of performing at such notable events was enough on its own, but the blessings progressed to a whole new level when the singer was invited to a personal viewing of the Shroud of Turin, and following his performance for the Pope’s arrival was directed to Pope Francis’ receiving line and was able to greet and shake the Holy Father’s hand. “I told him that USA loves him so much. He said he was coming to the US, and then he said ‘Remember me, please’ which I took to mean ‘Pray for me.’ ”

Ceili Rain has been a professional touring and recording group since 1995 and is currently celebrating its 20th Anniversary. The band has released eight all-original recordings, and has been recognized with fourteen Unity Awards by the United Catholic Music and Video Association.

The name Ceili Rain means “a downpour of heavenly partiness.” The word Ceili is Gaelic for an all-ages, wedding reception-type party, and the Latin “Coeli” means “of heaven.”

Ceili Rain has been providing its own brand of all-original, energetic, uplifting and joyful Irish flavored music to Catholic dioceses, parishes, adult events, youth gatherings, celebrations, liturgies, adorations and fundraisers both nationally and internationally as well as secular venues and music festivals. “We have been blessed to have our “universal” brand of music and messages embraced by people of all faiths and even no faith,” says Halligan. “There is no doubt that our music speaks volumes to our Catholic Church following, but it is completely inclusive of anyone who has a yearning for God, love, joy, togetherness and/or peace.”

Ceili Rain is available for events of all types in and out of the US. CD’s and related merchandise can be purchased from their website. All songs and albums are also available on iTunes and all digital outlets worldwide.

3 thoughts on “A Nice Story”