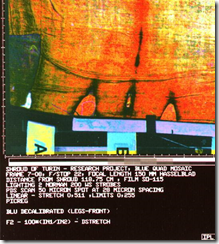 Did Hugh Farey not just drop a bunker buster on the Quad Mosaics when he wrote [in a comment], “These studies are in fact largely ignored by authenticists, in that they are assumed correct and quoted as gospel without any reference to what they actually say. Non-authenticists, on the other hand, have studied them in considerable detail, such that we can say with authority that any contamination of the radiocarbon corner of the shroud made it appear older, not younger, than it really is […].”

If Rogers misread the Quad Mosaics, now what?

I think Hugh may be paradoxically right!

(link and ellipsis above added by me)

Hugh has since added the following in a  clarifying comment:

Claim: “We can say with authority than any contamination of the radiocarbon corner of the shroud made it appear older, not younger, than it really is.” This is based on John M. Morgan III’s paper ‘Digital image processing techniques demonstrating the anomalous nature of the radiocarbon dating sample area of the Shroud of Turin’ at http://www.academicjournals.org/article/article1380798975_Morgan.pdf, where he shows that the radiocarbon samples are increasingly contaminated the closer they are to the corner, and on Ray Schneider’s St Louis paper, ‘Dating The Shroud Of Turin: Weighing All The Evidence’ at http://www.shroud.com/pdfs/stlschneiderpaper.pdf, where he shows a 99.93% correlation between the radiocarbon dates and the UV-fluorescence.

I don’t know what paradoxically right means. However, Hugh is non-paradoxically right, at least as it applies to this blogger: I did assume that what I was being told about the Blue Quad Mosaics was correct. I didn’t think about it at all. Now I’m not going to make the same mistake and assume Hugh is right. I’m a layman. I’ve read the Morgan paper and I listened to Ray in St. Louis. Now I need to have it explained to me. I’m totally confused. No paradox there.

I recommend a paper by Barrie Schwortz: SOME DETAILS ABOUT THE STURP QUAD MOSAIC IMAGES

And I also recommend an earlier posting in this blog:  Comment Promoted: Are the Quad Mosaics Meaningless?

76 thoughts on “Do the Blue Quad Mosaics tell a different story than we think?”