The Catholic Sun, the official newspaper of the Diocese of Phoenix asks in a headline, Real or phony? Replica of Shroud of Turin on display at two parishes:

The faithful will have several upcoming opportunities to venerate a replica of the Shroud of Turin on display at two parishes in the Diocese of Phoenix and learn about the mysterious cloth.

In 1978, a team of 24 scientists examined the shroud for five days. They released a statement in 1981 that declared, “We can conclude for now that the shroud image is that of a real human form of a scourged, crucified man. It is not the product of an artist. The blood stains are composed of hemoglobin and also give a positive test for serum albumin.”

A carbon dating test performed in 1988, however, revealed fibers from the cloth dated from the around the 13th century. Those who insist in the veracity of the shroud say that the carbon dating tests were performed on a portion of the cloth that was rewoven during the Middle Ages and are therefore misleading. 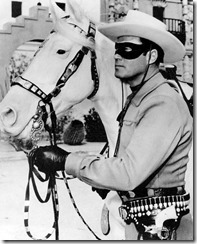 And to set the record straight, your and my favorite Lone Ranger (the paper didn’t call him that. I did):

International researcher and lecturer Russ Breault has been studying the shroud for over 25 years and founded the Shroud of Turin Education Project. Breault will present “The Shroud Encounter” at 2 p.m. March 29 at St. Steven Parish in Sun Lakes. Admission to the event is $10 with proceeds supporting the building of the parish’s new sanctuary.

While it is a fitting image, lone as in Lone Ranger doesn’t work. There is Barrie Schwortz who just this past Thursday and Friday lectured in Windsor (as we previously announced) and a host of others. But then again there were many Texas Rangers.

3 thoughts on “The Lone Ranger in Phoenix Later This Month”