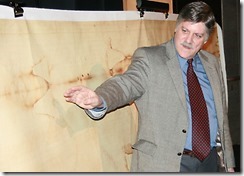 Written by Amanda Lauer, the article, Expert gives Shroud of Turin presentations in Neenah  appears in The Compass, the newspaper of the Catholic Diocese of Green Bay, Wisconsin. I particularly liked the last paragraph (knowing full well that you will read the whole article from the beginning):