In conclusion, the identity of the Beloved Disciple remains a debatable
(and perhaps irresolvable) issue. 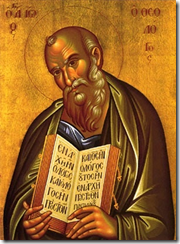 Stephen Jones is up with an interesting introduction to the second installment of his Servant of the Priest entry into the Shroud of Turin encyclopedia he is writing:

Several early Christian writings record that the resurrected Jesus gave His shroud to different individuals. . . . A third possibility, which seems not to have been previously considered, is that "the servant of the priest" was the Apostle John, of whom there is historical and Biblical evidence that he was a priest and that he may have even been a servant in the High Priest’s household. This latter possibility, that Jesus took His Shroud with Him out of the empty tomb and later gave it to the Apostle John, seems the most likely.

Fascinating. But John the who? All of the above? And more?

Last month,  Cornelis Bennema uploaded a paper to Academia.edu on The Historical Reliability of the Gospel of John. Around page 14 we encounter a discussion of the authorship:

If we can accept that the Beloved Disciple is the author of this Gospel, the next issue is to decide on his identity. The variety of candidates that scholars have proposed for his identity (e.g., John of Zebedee, John the Elder, Lazarus, Thomas, Nathanael) should warn us to tread carefully and modestly. It seems that “the disciple whom Jesus loved” is deliberately kept anonymous in the Gospel, which implies that he cannot be one of the named disciples in the Gospel and hence we can rule out the identification with Lazarus, Thomas or Nathanael. Nonetheless, Bauckham argues that while the Gospel uses the literary device of anonymity, it does not want to conceal the identity of the Beloved Disciple and it is highly likely that the original readers knew who the Beloved Disciple was. Besides, the title “according to John” was probably included in the Gospel from the outset, thus strengthening the argument that some of the first audience knew this John. We must therefore probe further by looking at the internal and external evidence.

In conclusion, the identity of the Beloved Disciple remains a debatable (and perhaps irresolvable) issue. Yet, even if we cannot ascertain beyond doubt the identity of the Beloved Disciple, what is relevant is that he was an eyewitness from the earliest days of Jesus’ ministry to the end and present at key moments. John’s Gospel emphasises the function of the Beloved Disciple within the Johannine narrative (as the reliable eyewitness to Jesus) rather than his identity. The most important contribution of the Beloved Disciple has been the writing of this Gospel where his testimony has been carefully preserved.  Although the Beloved Disciple was not necessarily one of the Twelve, if we consider his privileged and intimate relationship with Jesus (13:23) and his “rivalry” with Peter, it seems likely that he was. . . . All things considered, I propose that John of Zebedee is the most likely candidate, but John the Elder is a serious contender. Yet, we should not exaggerate the issue of authorship with regard to the historical reliability of the Gospel of John because an account from John of Zebedee is not necessarily more reliable than one from John the Elder. Nor is an account written by an eyewitness (e.g., John’s Gospel) necessarily more reliable than one written by someone else but based on an eyewitness account (e.g., Luke’s Gospel).

St. John, Servant of the Priest?  Let’s see where Stephen takes us as he continues his posting.