“poets, chroniclers, knights and others who were involved tell their own stories
and, in so doing, illuminate this time in history, the Hundred Years War,
when a most extraordinary and important story [of the shroud] unfolds” 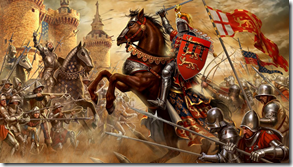 I would like to draw your attention to a narrative I have recently placed online called: The Lirey Toga.

This is the result of research into my ancestors, the De Noyers, and their involvement with the Holy Shroud, later known as the Shroud of Turin, when it was in France during the Hundred Years War.

It is interesting, well written and informative. I am reminded of Daniel Scavone’s several papers in which he argues that emerging knowledge in Western Europe about the Holy Shroud in Constantinople, the Mandylion, inspired the legends of the Holy Grail.  Some papers, I think,  to read once again on an autumn Sunday afternoon.

A you-should-get-the-point sample from about midpoint:

. . . Does Joan of Arc ever set eyes on the Holy Shroud? Therein lies a Rembrandt or
a Van Dyke painting. Reluctantly, I believe the answer has to be that she did not since such an occasion would, without doubt, have been recorded.

However, apart from such fascinating conjecture, the proximity of the Holy Shroud to Joan’s birthplace of Domrémy lingers in the mind and I begin to wonder if there are other links between the Shroud and her life. . . .

David’s paper sort of draws to a conclusion around page 40 with this:

The essential features of the Arthurian saga, containing both historical and fictional elements, have been fulfilled in the life of Joan of Arc. All have become real: Excalibur and Joan of Arc’s sword from the church of Sainte Catherine of Fierbois. There are the several Avallon links via the families associated with caring for the Holy Shroud and, especially, Joan’s riding out of Avallon on the way from Vaucouleurs to Chinon. There are the dramatic similarities between Lançelot and Alençon. There is the route of military confrontation followed by both Joan of Arc and Arthur along the Loire with both ending up in Burgundy. Furthermore, both are betrayed. What Arthur does in history and fiction, Joan of Arc does in reality. I fully believe that her realisation of Galahad makes the Holy Shroud, with which she has many links, the equivalent in her life of the Holy Grail. This being the case, since all the other main features of the Arthurian saga have been realised, the Holy Grail itself is now actualised in the form of the Holy Shroud. In other words it too becomes real. This means it is, truly, the Holy Shroud of Jesus Christ.

This immensely holy item, the Holy Shroud, has here been identified with the Holy Grail. Is this acceptable? Does the Holy Grail itself contain information that could provide the answer to this question? Here is something interesting. What is to be found in the twelve letters that constitute the three words, The Holy Grail? One word that can be made if the letters are reconstituted is, LIREY. Among the remainder of letters a second word stands out and the letters are in the correct order. The word is, TOGA, defined, and so similar to the Shroud, as a long piece of cloth worn wrapped around the body. The Holy Grail transmutes itself into the Lirey Toga, a garment worn by a living Roman at the time of Christ. How appropriate considering Christ’s miraculous Resurrection.

poets, chroniclers, knights and others who were involved tell their own stories and, in so doing, illuminate this time in history, the Hundred Years War, when a most extraordinary and important story unfolds.