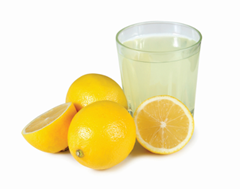 Colin Berry, we discover by reading his blog, is experimenting with lemon juice and some other concoctions: the stuff of secret writing. Here he comments on September 29, 2014 at 1:09 AM

So, there’s a range of options available to our medieval relic-manufacturer, he with a gleam in his eye, having been tipped off re the invisible ink trick.

He could have done it my way, and impregnated the linen first with sugar solution, fruit juice whatever, and then using a heated template to imprint. That would explain the negative image, and indeed one might venture to suggest that a negative image was indeed the prime objective, if the aim was to simulate a sweat imprint.

However, there’s still more mileage in the invisible ink scenario since it does not preclude a painted-on image. While no fan of that idea, primarily because it calls for painting a negative image that might seem somewhat avant-garde, certainly for the medieval era, it has its merits. . . .

In fact the technique is so adaptable, so replete with possibilities for modifying this or that detail to achieve the most pleasing and ‘convincing’ end result that I confidently expect Occam’s Police to descend on me as soon as word leaks out from these otherwise private musings, warning me against multiplying entities unnecessarily.

Am I ready to announce to the world that the TS was (or could have been) produced by invisible ink technology, an application of parental pre-TV, pre-computer era stock-in-trade for entertaining children on a wet afternoon?

The lemon juice effect is so potent, sensitizing linen to a deep scorch that would be unobtainable in its absence, that I’m inclined to think that so major effect might very well be the key to understanding the nature of the TS image. But what is the chemical basis, if it’s neither sugar nor organic acid that is the scorch-promoting factor?

What happened to your invisible message?

What other liquids work well to make invisible ink that develops under heat? When you painted the lemon juice solution onto the paper, the carbon-based compounds were absorbed into the paper’s fibers. When you heated the paper, the heat caused some of the chemical bonds to break down, freeing the carbon. Once the carbon came into contact with the air, it went through a process called oxidation, one effect of which is to turn a darker color. Oxidation doesn’t always need heat to occur. Some fruits themselves can turn brown from oxidation. Think of an apple or pear slice that is left out on the counter for too long.

6 thoughts on “Secret Image Made With Invisible Ink”