By St. Louis, will it confusing to talk about 3D in conjunction with the shroud?

Colin writes in his blog:

The Turin Shroud image is famously 3D-enhancible, given the right software. Initially it was shown with the so-called VP8 image analyser that was allegedly space-age technology, and not surprisingly led to much over-hyped speculation that the TS image was different from any other.

This  blogger pricked that particular balloon some 2 years ago, pointing out that the 3D- enhanced images not only brought the man’s image up out of the page, but the 1532 scorch marks as well. (Wikipedia credits me with making that finding, but I’ll try not to let it go to my head).

There’s more talk right now about what the modern day equivalent to VP-8 (freely downloadable ImageJ software) does or does not do to the TS image that is meaningful. In other words, what are the ‘correct’ settings that gives a valid image?

We need to distinguish between 3D plotting and 3D enhancement. Colin took a cartoonish picture meant to be a depiction of sorts of Jacques de Molay, the Grand Master of the Knights Templar. Why, well read that in his blog. He then executed a rather simple 3D Surface Plot using the original colors to plot with. In other words he merely gave the picture some shape based on the relative luminance or brightness of every x/y coordinate in the picture.  That is 3D enhancement. I made a reasonably good imitation of it. It is the second picture and it looks almost as if I stole it from his blog.

But that isn’t really isn’t a legitimate plot. You need to use a monochrome color, not the original colors and not the grayscale (of those colors). There are two

ways to do this. First you can use the two monochrome colors the tool provides, blue and orange. Or you can load a simple flat color background as texture. I used a solid green background image. As you can see, the plotting yields very unnatural elevations. 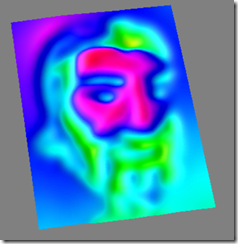 Finally, you can use on of the Color Look Up Tables such as the Thermal LUT. O.K. has made this point in comments elsewhere. These can be very telling as the example on the left shows.

“[W]hat are the ‘correct’ settings that gives a valid image?”, asks Colin. I don’t know. But unless we sort this out there is going to be a lot of confusion.