“This is where the weird part comes in, and I am still puzzled why this miracle,
which has been well-documented and verified by church officials,
is less publicized than the Shroud of Turin . . . .” 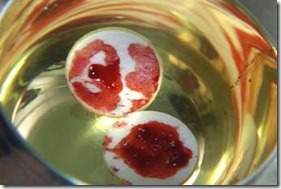 Alicia Colon, this past Sunday morning in American Thinker, on What the Secular Media Doesn’t Know about Pope Francis:

On August 18, 1996 in Buenos Aires, Argentina, at Holy mass, a woman discovered a discarded host on a candleholder and brought it to Fr. Alejandro Pezet who placed it in a container of water inside the tabernacle of the chapel of the Blessed Sacrament. The following Monday, August 26, upon opening the tabernacle, the priest was astonished to find that the Host had become a bloody substance and he notified his Bishop Jorge Bergoglio (now Pope Francis I), who gave instructions that the bloodied flesh be photographed. When the photographs were taken on September 6, the bloodied flesh had grown significantly in size. After it had been kept in the tabernacle for a few years the Bishop decided to have it scientifically analyzed since it had not suffered any visible decomposition.

This is where the weird part comes in, and I am still puzzled why this miracle, which has been well-documented and verified by church officials, is less publicized than the Shroud of Turin which still remains officially uncertified.

In 1999, in the presence of then Cardinal Bergoglio, Dr. Ricardo Castanon, an atheist at the time, sent the fragment to New York for analysis, but did not inform the team of scientists its origin so as not to prejudice the study.  One scientist, Dr. Frederic Zugibe, a cardiologist and forensic pathologist, determined that the substance was real flesh and contained human DNA, and furthermore he concluded was a piece of heart muscle.

Read on.  Where was this test done? Rockland County Medical Examiner’s lab? “One scientists” – so who were the others and what do they say? Are there papers on this? If I Google, “The Eucharistic Miracle of Buenos Aires” I do get quite a few interesting hits but nothing that seems like a primary source. Phrases like “well-documented and verified by church officials,” is not exactly helpful journalism. Maybe that is why this story doesn’t have legs,  why there is a weird part.

Any useful material? Well-documented and verified by church officials?

35 thoughts on “The Eucharistic Miracle of Buenos Aires”