While watching the Orioles go down in flames this evening, I wrote a posting about the origin of the AB blood type . . . .

He attached it and here it is:

Just how old is the AB blood type?

In response to an earlier posting on the upcoming BTST meeting, there has been much discussion about when the AB blood type first appeared in history. AB blood type has been reported in skeletal remains that are approximately 1,600-2,000 years old (Am. J. Phys. Anthrop. 47: 89-91, 1977), and in tissues of mummies from 3 B.C. to 4th century (Forensic Science International, 43: 113-124, 1989). These studies were done using serological methods (antibodies), which recognize the ABO molecules on the surfaces of blood cells (see Figure below). As ABO antigens are also found in many organisms including bacteria, fungi, and insects, the issue of “false positives” is often mentioned when discussing blood typing of ancient samples (see “Blood on the Shroud of Turin: An Immunological Review, available on shroud.com, for a detailed discussion).

An alternative method for blood typing exists, which involves molecular biology (DNA) techniques to probe for the genes responsible for conferring ABO blood type. Because human red blood cells (RBCs) lack a nucleus, this method evaluates gene expression in white blood
cells (WBCs), or other nucleated cell types (see Figure below). In this technique, which uses the polymerase chain reaction (PCR) to amplify DNA, possible issues with false positives due to bacteria are circumvented because it is the (internal) gene responsible for encoding the surface antigens that is being evaluated. Unlike the surface antigens which may be similar in humans & bacteria, human ABO genes are easily distinguished from DNA of other organisms. While this may seem like the method of choice for analyzing ancient samples, such studies are often precluded because of DNA degradation issues. Indeed, for typing studies of aged bloodstains, more reports exist in the literature using serological (surface) analysis relative to molecular (DNA) analysis. 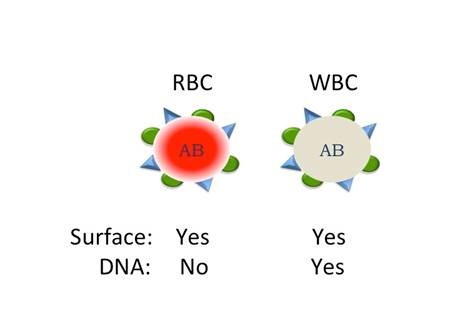 Within the past couple of years, I have written to numerous scientists who specialize in the fields of anthropological and molecular evolution (my research background is in cell biology & immunology) to inquire about the origins & appearance of the AB blood type. Specifically, I asked what is the first human or human-related sample that has typed as AB using molecular biology (DNA) methods; and when is the AB blood type believed to have emerged in human history? The consensus from the answers I received is represented in several specific responses quoted below, “ABO systems have not been widely analyzed in ancient remains [using molecular biology techniques], there are very few papers on the blood system.” “There certainly is controversy as to when group B (and thus AB people) emerged.” A specialist at Harvard replied, “It is CERTAINLY [his caps, not mine] well before 10,000 years ago”, “some place the origin of B @ 100,000 years ago.” “I am very sure it was long before 1,000 years ago-based on DNA divergence from the primordial group A gene”. One of the world’s foremost authorities on the molecular analysis of the ABO blood group, whose laboratory first cloned the human ABO genes, was quite adamant in his response that D’Adamo’s claims that the AB blood type is only 1,000 years old “does not fit with the current theory of the evolution of the ABO gene”…and “is not based on scientific evidence”.

In the literature, the few samples that have been analyzed (by molecular DNA techniques) are reported as O; for example, 2 Neanderthals analyzed by Lalueza-Fox in 2008, and Otzi the 5,300 year old “ice man”. In the current population, ~44% of people are type O, compared to ~5% for type AB (A and B are 35% and 17%, respectively). Thus, perhaps it is not that surprising with such a very limited amount of DNA studies reported, type O would be more prevalent. Clearly, much more work remains to be done in this particular area, especially in relation to molecular analysis of aged samples.

8 thoughts on “Just how old is the AB blood type?”