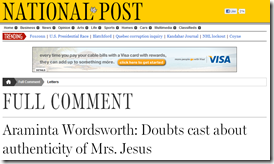 That is how the National Post describes Araminta Wordsworth’s column: “Quality punditry from across the globe.” After all, she just wrote:

Unfortunately for excitable headline writers, the papyrus looks set to join the Shroud of Turin and the James, son of Joseph, brother of Jesus ossuary as troubling fakes. It should also provide entertaining opportunities for inconclusive debate.

6 thoughts on “National Post: Quality punditry from across the globe”