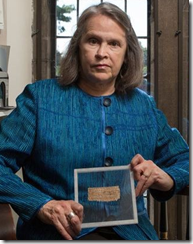 Other than being a tad chauvinistic, and extraordinarily pre-Vatican II, we have to ask if Mundabor has a valid point to make in The Shroud And The Papyrus:

If [Harvard professor Karen King, pictured] had found a papyrus saying “asses fly”, she would probably have told us it might have been that in ancient times asses used to fly.

What an amazing discovery, and what an academically challenged researcher.

This is very interesting. On the one hand, you see no liberal press – or feminist “researchers” – ever defending the authenticity of the Shroud of Turin, which is an utterly, utterly impressive archeological find and, by the way, several metres long. On the other hand, a small piece of papyrus written several centuries after Christ is found and everyone thinks he can play Dan Brown.

7 thoughts on “When Asses Flew”