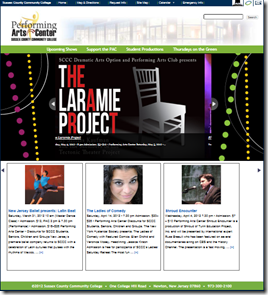 This time it is Sussex County Community College Performing Arts Center in Newton, New Jersey, just about a hour’s drive from Manhattan on Wednesday, April 4, 2012 at 7:30 pm. There is an admission charge between $7 and $10. The promotion material gets better and better.

Shroud Encounter is a production of Shroud of Turin Education Project, Inc. and will be presented by international expert Russ Breault who has been featured on several documentaries airing on CBS and the History Channel. The presentation is a fast moving, big-screen experience using nearly 200 images covering all aspects of Shroud research.

The Shroud of Turin is the most analyzed artifact in the world yet still remains a mystery. Although the presence of specific pollen indicates the shroud originated in Israel, the 14-foot long linen cloth that has been in Turin, Italy for over 400 years and bears the faint front and back image of a 5’10″ bearded, crucified man with apparent wounds and bloodstains that match the crucifixion account as recorded in the Bible. Twenty-four scientists concluded that the image was not produced by an artist as there is no trace of paint, pigment, or dyes. The image is so superficially imposed it is only present on the top micro-fibers- only the depth of a single bacterium and is not present underneath the blood, meaning the blood was present first. Millions believe this is the burial cloth of Jesus Christ, but there is no proof of decomposition present. Dismissed in 1988 due to carbon dating indicating the cloth originated in medieval times, the cloth was brought back to the public eye in 2005 when a scientific journal published a report citing the labs violated sampling protocol, deeming their results inconclusive and invalid.

Shroud Encounter will cover all aspects of the history, science, art and theories of how the image may have been formed. For more information, please visit shroudencounter.com.

And if you miss that, Russ will be at East Carolina University Hendrix Auditorium in Greenville, NC, on April 11 at 8:00 pm.