Mario Latendresse’s Shroud Scope is still my favorite Go-To site for exploring shroud images (The Enrie and Durante 2002 images). But I must also praise the facility offered by the Diocese of Turin of the Haltadefinizione images on the web. It is another Go-To site. 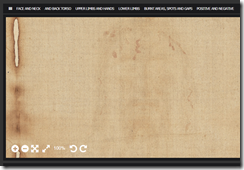 Although based on the Haltadefinizione scans, it does not have the high definition quality of the iPad app, Shroud 2.0. But that is not what this web-based tool is for. It’s a simple, easy way for the public at large to explore the shroud’s image online. As a Go-To spot for the general public, it may be the best. 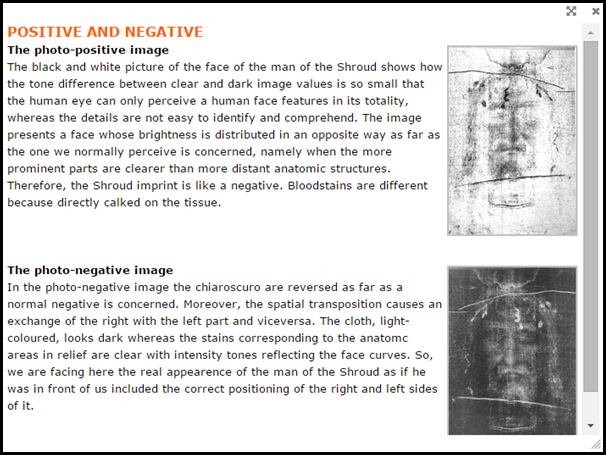 The tool does not offer rectangle drawing for copying parts of images but that is unnecessary with simple tools that are now part of every standard operating systems (I used Window’s notebook for the above extracts).

Resolution looks good but the file is still very limited in terms of size (it need not be). If you want really high definition you will need to use Shroud 2.0 from which the following image of the epsilon bloodstain was taken in my iPhone. Yes, my iPhone! And then I doubled it just for the fun of it.  It is even bigger and better on an iPad. The app and image stream is available from iTunes. The app is free and the data is $3.99.

HF has made what seems to be a brilliant observation (see Aug 28, 3:42 am). Would love to see some pictures of just what he is looking at. Is that possible? This may be a whole new paradigm for banding

I made the screen shot shown here. You should be able to click on it to enlarge it.

This is what Hugh Farey wrote:

In Shroud 2.0, longitudinal banding is very clear, and is definitely related to the pitch of the zigzag, specifically the darkness of the shadows cast by the overlying warp threads onto the underlying weft threads. Thus the entire Shroud is covered in alternating lighter and darker bands. This pattern is not seen on the Durante photo. Here the various longitudinal stripes seem to me to be much thinner, where you can see them, and appear to be related to the ‘spines’ of the herringbone ribs, which may have formed into slight ridges or troughs as part of the rolling up process. I cannot find a good positive Enrie image, but the large scale negatives, which can be found at the link above among others, show a variety of bands, some very thin and some as thick as a width of a pitch. However they are much less consistent and the thick ones do not appear to be lighting artifacts as they sometimes extend over two or three bands of alternating pitch. It is not clear in any case that the pale vertical areas defning the sides of the cheeks, or the dark vertical areas defing the fall of the hair, are due to imperfections in the weave or the lighting of a photo rather than the shape of the image model itself. As such, attempts to ‘correct’ the image by removing them are probably misguided.

Colin Berry certainly agrees. Here, and in his blog, he writes, “Brilliant. Hugh. Possibly, nay probably the best contribution to ‘banding’ in all time.”

Two “brilliants.” I think I see what Hugh is talking about. I may need to agree with Colin. But, “the shape of the image model itself.”? Model? I would like to see pictures with pointed narrative. Hugh, can you send along a couple of screen shots from your perspective?