A medieval-provenance TS would never have been commissioned in the first place as a painting (from which pigment has subsequently been shed to leave a ghost image). Why not? Because of an obvious point that I omitted to mention – namely the double image (frontal v dorsal). It was clearly intended to represent a burial shroud, and one might even suggest that it’s the double-image and its appeal to the visual senses as having an up-and-over origin that makes it so iconic, even to modern eyes.

If one goes to the trouble of producing a life-size double image on up-market linen to represent the imprint left by a real person (no matter whom) then one does not employ a paint brush and artists’ pigments. The simplest medieval pilgrim would have spotted straightaway that he was looking at a painting, not a holy relic as billed.

Best explanation I’ve seen so far, at least in blogspace during the last few days. But then again, what does that leave. Thermal Imprinting?  Painting with lemon juice?  Non-brushstroke painting methods?  Photography?  Sun bleaching with glass templates?

There is something nobody has thought of. And maybe that something has nothing to do with faking a double image burial shroud. And since I don’t buy into any of the currently suggested naturally occurring chemical hypotheses or any of the “cosmic ray” image producing suggestions, I feel that we are, for now, nowhere except at a lot of dead ends. My gut still tells me it’s real. 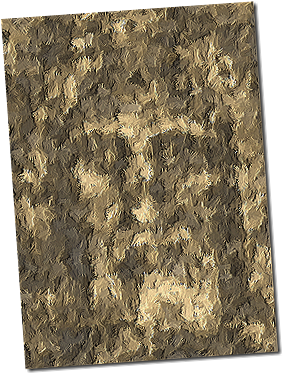 The ‘shroudological’ concept of what a painting is, and what might constitute evidence for one, has changed a lot since the 70s. Why this should be I’m not sure – possibly because ‘Science’ trumped ‘Art’ when it came to authority in those days, and the scientists involved in the Shroud showed little evidence of knowing much about painting. There was much talk of ‘a painting would seep through the cloth and be visible on the back’ and ‘a painting always shows the directionality of brush strokes’ and ‘a painting always has shadows which show where the light was coming from’ and even, ‘a painting always has outlines,’ all of which seem rather naive, and fairly obviously to anybody who’d actually visited an art gallery, simply untrue.

They were on better ground in the search for pigment, although even here, they did not really know how much pigment could be sufficient, so that their arguments were not about whether there were any iron oxide particles, but whether there were enough to create an image. McCrone thought there were, and produced at least one experiment which appeared to demonstrate it. I do not know if it was challenged by any counter-experiments showing the opposite.

The scientists were on even better ground in their search for a colourless binder that would hold the pigment to the cloth. This, it could be reasoned, might remain even when most of the pigment had rubbed (or been washed) off. According to STuRP (Schwalbe & Rogers), McCrone’s chemical test for a proteinaceous binder (amido black) shows positive for any linen and could not have identified anything on top of it, while their own tests were more specific and definitely ruled out any protein on the image area. However they also ruled out any possibility of starch being the binder, a finding that was later retracted by Rogers, who decided he could find some after all. This suppported his ‘starch and saponin’ surface layer hypothesis, but could also support McCrone in his search for a binder.

Even lower, as it were, than the binder, would be any chemical deterioration of the cloth itself, caused by pigment, binder, or carrier, all of which had disappeared. Guarlaschelli’s painting hypothesis depends on this, I think, and chemically, has not been demonstrated to be untenable.

So, no, the painting hypothesis has not definitely been ruled out.