The apparent 3D in the picture to the right was created by the arc of the sun.
The green color was photoshopped in for illustration purposes only. 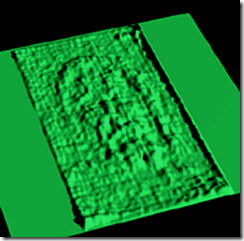 A reader points out:

[Colin Berry wrote], “Takeaway message: there is no encoded 3D information in a photograph of the TS. There is merely a 2D image that has patterns of light or dark that can be computer-processed to give APPARENT relief. But if the original image was not created by photography, but by some other imaging mechanism, there is always the possibility that one will be fooled into thinking that a darker-than-average feature on the image represents high relief. It ain’t necessarily so. Different imaging models create different interpretations.”

He is right. Colin has shown one way that apparent relief can be generated that has nothing to do with shape. Dan, do you remember Nathan Wilson and his Shadow Shroud?  He showed another way to create a 3D image that had nothing to do with it.

How could I not remember Nathan.  We debated briefly on an ABC Radio program.  He got the better of me that day and made me look foolish.  Nice guy, though. And yes, you are right, he did demonstrate another way to generate apparent relief. Apparent is the essential word, however. 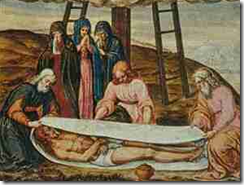 Personally, I don’t think what we see on the Turin Shroud is only apparent relief.  I think it is real relief. I think the grayscale values (my preferred term for brightness, darkness, intensity, luminosity, shade, density, etc.) represent that. Regrettably, the only evidence I see for this is that it seems so. “It seems so” is one step lower on the evidence quality ladder than “I think I see.”  Moreover, I have no reason to think that the grayscale values of the shroud images represent distance between the outer surface of the body and facial hair and a burial shroud above and below it. My gut says it is so. Occam’s razor is a great temptation. But in the end there is really no evidence for the scene we imagine.  Could it not just as easily be distance from a hypothetical plane that intersects the body from head to toe, so to speak?  Or relative distance to some point in space? Those notions are harder to imagine because we can’t imagine an action-at-a-distance scenario for them. We have imagined a scenario to go with body to shroud distance. Well, sort of, maybe.

Speaking of imagined scenarios:  “John Jackson’s ‘Fall-through’ hypothesis for image formation belong to the class of hypotheses that invokes the action of photon radiation” (newest Critical Summary 2.1 out of Colorado, page 73). Are we to measure brightness in terms of distance or measure it in terms of time that the cloth spends falling through a mechanically transparent body?  And then  there is Frank Tipler’s hypothesis of dematerialization by electroweak quantum tunneling, in which a “proton plus electron goes to neutrino plus antineutrino.”  Is this a measure of anything that we can comprehend? Tipler, in his book, The Physics of Christianity implies it is distance by telling us that at the time of dematerialization of the body, the cloth is perfectly flat.

And of course we can’t imagine inexplicable non-process miracles; the touch of a hand or finger, a few spoken words, or a seeming unrelated unusual activity all serve as examples. In the New Testament Jesus changes water into wine, a woman is healed when she touches Jesus’ garment, Jesus feeds a multitude with five loaves of bread and two fish. Where is the process in these? What imagined actions are taking place.?  More recently, there is the apparition of Mary appearing to Juan Diego; Mary had arranged flowers in Juan Diego’s cloak and when later he opened his cloak in the presence of a bishop the flowers fell out leaving behind an image now known as Our Lady of Guadalupe. Perhaps the image on the shroud is the result of an inexplicable non-process miracle like that.

Or let’s just suppose Colin is right and the image we see was formed by a hot template. Could the resulting variations in grayscale values  have been caused by varying temperatures in a large piece of metal?

In 2005, Nathan Wilson, experimented with a method he devised, a method for creating an image similar to the shroud.  This isn’t to suggest that this was how the image was formed. But it does show that so-called brightness (grayscale) maps can be generated by other methods that are not formed by action at a distance and that do not contain real distance information. Wilson writes:

The image on the Shroud is dark on a light background. Previous theories had all attempted to explain how linen could be darkened without the use of chemicals, stains, or paints. Wilson wondered if it would be possible to lighten the already dark linen, leaving only a dark image behind.The simplest means of lightening linen, available to all men throughout time, is to bleach it with sunlight. Wilson believed that if an image of a man were painted on glass with a light shade of paint, placed over darker linen, and left beneath the sun, a dark image would be left on a light background. More importantly, he believed a dark and light inversion would take place, creating a photonegative. Wherever light paint had been used, the linen would be shaded from the sun and left dark and unbleached. Wherever the darker shade of linen had been left exposed, the sun would bleach the cloth light. In addition, it was also believed that because the sun would be exposing the linen from approximately one hundred and eighty degrees, a crude three dimensional image would be created.

How 3D-ish are the images?  Colin’s, as well?  Those of the shroud?

Oil paint on glass, produced by David Beauchamp in roughly forty-five minutes while watching stand-up comedy. This painting was the most successful and was used to produce three different images on linen.

The first linen image created by Beauchamp’s window, exposed for ten days generally parallel to the sun’s path. The linen bears a negative image, dark on light (left), which becomes positive, light on dark (right), in a true photonegative.

The second linen image created by Beauchamp’s window, exposed for fifteen days generally perpendicular to the sun’s path. The lines are much harder than those in the first image.

The third and final image created by Beauchamp’s window, exposed for approximately one hundred and forty hours beneath a sunlamp. The stationary light source created an image flat and scattered.