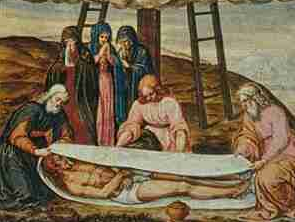 Or was the stone moved so Peter and the Beloved Disciple could see in, see that the tomb was empty and see the burial cloths lying there?  Was that necessary?  Were the post-resurrection appearances not enough?

And the burial cloth, now in Turin, that many of us believe is or might be a burial cloth mentioned in the Gospels, has a faint image of a man on it.  Why?  Consider, too, maybe it was a cloth used instead beneath the cross or used to transport the body to the tomb. Nonetheless, why an image?

Without the image, there would have been no history of a cloth with Christ’s image upon it during the first twelve-hundred years leading up to the Fourth Crusades, no Lirey story worth telling, no startled Secundo Pia, no VP-8 epiphany moment, no STURP and no endless discussion now. Is that why?

Is it why as much as how in the sense that we wonder if the image was caused by an accidental energetic consequence of a miracle? Is that why?

Or a natural phenomenon? Is that why?

Is it why in that a forger at some time in history felt he needed an image in addition to ample signs of brutality? Is that why?

No, really, why is there an image on the cloth?

59 thoughts on “No, really, why is there an image on the cloth?”