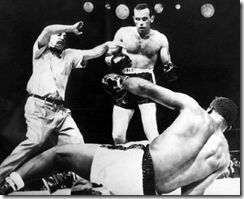 John Klotz, in a MUST READ essay, CNN’s Finding Jesus loses Him, makes it abundantly clear. By page 7 John is writing:

There is more: an eyewitness account of exhibitions of a linen shroud that is more than arguably the Shroud of Turin. The witness was a French knight who participated in a siege of Constantinople during the Fourth Crusade which ended with the "Christian" knights looting Constantinople and stripping it of all its cherished relics that could be carried away. Among them was the linen cloth that was the Shroud of Turin.

This is how Gibson and McKinley described it their book Finding Jesus:

"In 1203, a Flemish knight named Robert de Clari, fighting with the Fourth Crusade then camped in Constantinople, noted that a church within the city’s Blachernae Palace put on a very special exhibition every Friday. On display wasn’t just the holy image of the face of Jesus, but the actual cloth in which Christ had been buried. In 1205 de Clari composed a more detailed account: ‘There was a Church which was call[ed] My Lady Saint Mary of Blachernae, where there was the shroud (syndoines) in which Our Lord had been wrapped, which every Friday, raised itself upright so that one could see the form (figure) of Our Lord on it, and no one either Greek or French, ever knew what became of this shroud (syndoines) when the city was taken [by the Crusaders].’" 10

What happened to the Shroud after Constantinople was looted by the French? Wilson has favored the idea that it came into possession of the Order of the Knights Templar in France. The Order was suppressed in 1307 by French King Philip the Fair. On March 19, 1314, its Grandmaster, Jacques deMolay along with the Order’s Master of Normandy Geoffrey de Charny were burned at the stake.11 That Geoffrey may have been related to the Geoffrey de Charny who was the documented owner of the Shroud in 1355.

However, Gibson and McKinley echo another view that has achieved some currency. One of the French knights who participated in the sack of Constantinople was Orthon de la Roche who performed outstanding service and was named the Lord of Athens. He later returned to France. Jeanne de Vergy was a descendant of Orthon. She became the second wife of the 1355 "owner" of the Shroud Geoffrey de Charny. Gibson and McKinley hypothesize that the Shroud was a part of her dowry when she married Geoffrey12

This is not a complete recitation of the reported history of the Shroud prior to 1532. When Professor Goodacre baldy states that there is NO evidence of the Shroud’s history before Lirey, he is simply wrong.

The KO is in the next paragraph:

In my opinion that is not his most egregious error. Perhaps it’s excusable as only his opinion. However, his statement that the critics of the carbon dating were engaged in special pleading is not just wrong but, in my opinion, reprehensible.

Some of us who are not, like John, skilled lawyers, need to remind ourselves what a special pleading is – to pull out that old definition from behind mind’s cobwebs. According to Wikipedia (I’m not a scholar, either) it is “a form of fallacious argument that involves an attempt to cite something as an exception to a generally accepted rule, principle, etc. without justifying the exception.”

Note:  The photograph, by an unknown photographer, is of Ingemar Johansson knocking out Floyd Patterson and becoming the boxing heavyweight world champion in 1959 is a press photograph taken before 1969 and is therefore in the public domain (Wikimedia Commons)