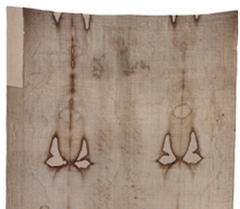 Stephen Jones has put together an interesting piece on the measurements of the shroud. This is a useful topic for the encyclopedia he is creating (see Shroud of Turin: Turin Shroud Encyclopedia).

Stephen seems to have decided on one set of measurements:

Authoritatively? I would have liked to have seen some discussion about other measurements. See , for instance, Length Measurements on the Shroud of Turin by Mario Latendresse. There are some significant differences:

If Stephen doesn’t address these differences he is likely to be challenged. He needs to address the differences in the  length for the left and right sides (see the top edge in the partial image above) if he is going to quote Ian Wilson speaking of “conformity to an exact 8 by 2 Jewish cubits” in his 1991 book, "Holy Faces, Secret Places: The Quest for Jesus’ True Likeness.”

For an encyclopedia entry there is too much topic drift and too much opining in the following:

Medieval forger? It is highly unlikely that a medieval forger would even know about the Assyrian standard cubit , and even if he did, it is even more unlikely that he would bother obtaining a first century fine linen shroud, especially given that fine linen then ranked with gold in value. And that is assuming that he could obtain one, especially one with the Shroud’s three-to-one herringbone twill linen, of which the Shroud is the only one remaining in existence!

It may be that or maybe, just maybe, a not so startling coincidence of something that is approximately so!

Note: All quotations and the picture snippet in this posting are considered Fair Use under the provision of Title 17 of the United States Code, Limitations on exclusive rights: Fair use and the Berne Convention Treaty along with the WIPO Treaty of 1996. (Fair Use is known as Fair Dealing in the jurisdictions of the Commonwealth of Nations). Copyright is a legal right with limits. The practice of quoting multiple paragraphs of text, for the purpose of criticism, comment, news reporting, teaching, scholarship, or research, is not an infringement of copyright. Stephen’s footnote #1 to his posting only underscores the need for Fair Use provisions in the law.

70 thoughts on “The Length and Width of It”