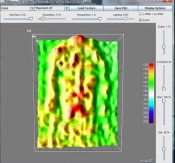 Can anyone explain how the image* on Colin Berry’s blog can begin to convince us that banding is not really all that real. Maybe you can understand what Colin is saying. Something about “bilateral symmetry.” If anything, it helps to convince me that there really is banding there. You really need to see it in its full size in Colin’s blog space so CLICK HERE.

Barrie Schwortz did some of the earliest technical work to show one optical illusion effect of the banding. (Use Google translation after obtaining the linked-to page in order to see it in English). It is well worth reading.

The left image shows vertical banding on the outside portion of each cheek that extends upward and downward well above and below the face, particularly so on the right side. The middle image shows the area Barrie chose to add +20 points (Photoshop calibration) of RGB luminance. The effect is immediately obvious in the right picture.

The banding is particularly obvious when shown with transmitted light.

One day I received an email from Robert Doumax, an imaging expert in Bordeaux, France. He had created a Fourier transform filter to isolate both vertical and horizontal banding in the fabric of the shroud. His filter produced the bottom image of three below.

Subtracting one image from the other image produces a tentative, partial banding map:

* About the colorful ImageJ image.  It has not been copied, stored or reproduced in anyway. The thumbnail preview is like a window into Colin’s site. It is an inline link to Colin’s blog space. By clicking on the image you can see it in its full size on Colin’s site. Even so, the use of a thumb nail image is considered fair use. Wikipedia is a good place to being reading about this.

[A] pointer causes a user’s browser to jump to the proprietor’s server and fetch the image file to the user’s computer. US courts have considered this a decisive fact in copyright analysis. Thus, in Perfect 10, Inc. v. Amazon.com, Inc.,[6] the United States Court of Appeals for the Ninth Circuit explained why inline linking did not violate US copyright law . . .

The thumb nail is too small to be a copyright concern. It is merely a graphical link.