On a hat tip from Russ Breault we learn of a new movie opening in theaters this September. Here is a trailer and press release for The Investigator, about a high school teacher who leads students to investigate the death and resurrection of Jesus Christ. Gary Habermas, a leading expert on the resurrection of Christ worked as a consultant on the film, and as we all know, he is a big proponent of the shroud’s authenticity. Is there any mention of the shroud? We’ll have to wait and see.

Movie Inspired by the Life of Rich Romano 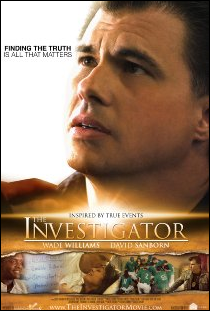 LOS ANGELES, Calif. (July 16, 2013) – Gabriel’s Messenger Films  presents the captivating feature film, The Investigator, starring Wade Williams and David M. Sanborn (West Side Story, The Miracle and King David). Releasing in theaters September 2013, the film is written and inspired by events in the life of Rich Romano (brother of actor Ray Romano), and features an experienced team of production executives, cast, and crew.

The Investigator is designed to encourage and uplift families in difficult times, and it tells the story of Police Sergeant James Buanacore (Williams), a twenty-year veteran investigator whose life crisis prompts him to make the most important investigation of his life – into the life of Jesus Christ.

Depressed and angry, James isolates himself until his famous brother (Sanborn) encourages him to take a job as a criminal justice teacher and baseball coach at a Christian high school. With his cop mentality challenging his students, James struggles through experiences with an unsupportive principal, a guidance counselor with a secret, and rebellious students. But when his best option seems to be quitting, a student challenges him to begin the investigation that will change his life and those of his students, forever…the investigation into the homicide of Jesus Christ. Using historical records and circumstantial evidence, he and his students conduct a mock trial, and the verdict surprises them all.

The Investigator is a stirring film that will touch audiences and challenge them to consider the reality of the life, death and resurrection of Jesus Christ. The movie’s heartfelt themes include reconciliation, second chances, forgiveness, sacrifice and overcoming obstacles and challenges in life. In partnership with Gabriel Messenger Films, Pastor Bob Coy of Calvary Chapel in Ft. Lauderdale is working with renowned historian Dr. Gary Habermas, the foremost expert on the resurrection of Jesus Christ, to create a workbook based on the themes of the film. Serving as a companion piece to the film, the workbook will be available to churches, ministries, and groups. The Dove Foundation, which reviews movies based on moral content, has given its “seal of approval” to The Investigator.

Filmed on location in Pinellas County in Florida, The Investigator is the flagship family-friendly release under Gabriel’s Messenger’s Films. A portion of proceeds from the movie will be donated to charity.

The Investigator is directed by Curtis Graham, best known for his work on Misconceptions and The Glass Window, and produced by Nicole Abisinio, recipient of numerous awards for Prime Of Your Life and known for her work in Broken Flowers. A strong crew also includes Editor Dan O’Brien (To Save a Life, Dancing with the Stars and Dear John), Emmy Award winning Costume Designer Dana Campbell, and Camera Operator Bob Scott (Fireproof and Facing the Giants).

What People are Saying About The Investigator:

“I didn’t think they made this kind of film anymore! Redemptive message, high quality, good acting, a keep you glued story, educational, inspirational, and for the whole family! It’s more than just a movie it has the power to change your life!”

-Pastor Bob Coy, Senior Pastor,
Calvary Chapel, FT. Lauderdale
“Our entire Executive Team watched The Investigator and were touched by the message of redemption and restoration that this movie brings. What a great story inspired by true events that reminds us about what is important in life. This is a movie that will appeal to anyone and will inspire them to greater things In their lives.”

”A moving and thought-provoking film about one man’s journey to investigate his faith and return to Christ.”

For more information regarding The Investigator, please visit:

12 thoughts on “The Investigator: New Film About the Death and Resurrection of Christ”