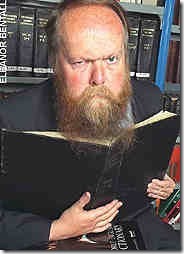 Many contributors help shape The Spectator’s ‘Books of the Year’ edition. One of them is The Telegraph’s Christopher Howse  who writes for that paper about Christianity and other faiths. It helps to read up to his comments about de Wesselow’s The Sign just to get a sense of his curmudgeonity:

. . . The most helpful piece of scholarship was Noel Malcolm’s translating the Latin version and appendix of Hobbes’s Leviathan in his monumental three-volume edition (Oxford, £195). I still haven’t got over the old devil insisting that God is corporeal. What could he have meant?

The best cover — to which the book lived up — this year used a wood engraving (reproduced below) of a shire horse by C.F. Tunnicliffe for the New Penguin Book of English Folk Songs, edited by Steve Roud and Julia Bishop (£25). Yet the same publisher also sent out a note this year saying that their volume on the Shroud of
Turin, Thomas de Wesselow’s The Sign (£20), was ‘one of the most important books we have published’. For important read stupid.

I’d like to know why Howse thinks it is stupid. Contrast this with what Barrie wrote on his site just a couple of days ago:

Speaking of the British Society for the Turin Shroud, the organization held its first public meeting in many years in Beaconsfield, England on Sunday, October 21, 2012. The highlight of the meeting was the presentation titled, "Why the Shroud of Turin Is Not a Medieval Hoax," made by featured speaker Dr. Thomas De Wesselow, acknowledged expert in medieval art and author of the recent book, "The Sign." Fortunately, the presentation was recorded on video by BSTS member David Rolfe and posted on his Shroud Enigma web page so you can watch it yourself. Of course, many readers already accept the scientific evidence that clearly demonstrates the Shroud is not any type of artwork, medieval or otherwise, but it is refreshing to hear it so clearly presented by a true expert in Medieval art history. This video is worth watching by every student of the Shroud and a "must see" for anyone who still believes the Shroud is a medieval hoax. I urge you to watch it and share it with your friends and family.