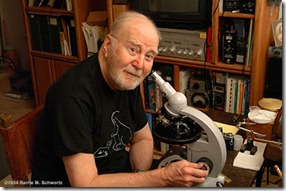 When a PhD-scientist, a frequent complainer about what he imagines to be ad hominem attacks against himself, stoops to criticize another scientist, not with reasoned arguments, but by pointing out that the other scientist lacks a PhD, I right away get a feeling that the PhD-scientist, himself, might be little more than an empty academic regalis. Dr. Colin Berry, PhD, wrote on his blog, “. . . there were the two magical mystery chemists of STURP [Adler and Rogers], [the latter] one lacking even a doctorate, who at critical junctures each allowed his imagination to run wild, abandoning the scientific method.”

(Ray Rogers is pictured here, photograph is by Barrie Schwortz, 2004)

“Afterthought:,” Dr. Colin Berry, PhD, then wrote, as if a Newtonian apple had hit him on the head (try to read this without laughing) . . .

. . . for those at a laptop, the litmus test of who has – or has not – “made it” in scientific research is the ability to enter a field of research (as distinct from a name) into a search engine, and then find the individual’s name on the first page of returns. I invite those on the Other Site who question my own credentials to google dietary fibre resistant starch. My sole-author 1986 paper is there as two separate links, once (at the top) against the number of citations, currently about 330, and the other to the abstract.

Now then, can someone on that site tell me what subject keywords to enter, unrelated to the Turin Shroud, that give returns for Rogers’ work (e.g. chemical explosives) or Adler’s work (porphyrins)? Repeat: I am seeking evidence that either made a deep impression as an innovator BEFORE working on the Shroud, one that would justify their description over there as “consummate researchers”.

Bully for him. Colin should use Google Scholar, however. He might try “thermochemistry,” or “pyrolysis and thin layer chromatography,” or “differential scanning calorimetric method,” or any number of subject phrases to find numerous papers in which Ray Rogers is the sole author or the first-listed author in several ethical journals such as Analytical Chemistry, Thermochimica Acta, The Journal of Physical Chemistry, etc. What a silly argument!

Perhaps Dr. Colin Berry, PhD, is jealous of the almost universal praise that Rogers received by his scientist peers at Los Alamos including many who were fellow members of the New Mexicans for Science and Reason (NMSR), a skeptical scientific organization affiliated with the Committee for the Scientific Investigation of Claims of the Paranormal (CSICOP). Wrote, Kim Johnson, a past president of the organization, “For several of us in NMSR, Ray Rogers was a friend. He was a Fellow at Los Alamos National Laboratory, and tried to be an excellent, open minded scientist in all things. In particular, he had no pony in the "Shroud of Turin" horserace, but was terribly interested in making sure that neither proponents nor skeptics let their scientific judgment be clouded by their preconceptions. He just wanted to date and analyze the thing.”

Perhaps Dr. Berry, PhD, is jealous of all the media and peer attention Rogers received as a responsible scientist citizen fighting against creationism science and all manner of pseudo-science in the state’s school system. He was a charter member of the Coalition for Excellence in Science Education in New Mexico.

Perhaps Dr. Berry, PhD, is jealous of Rogers, who having served in the navy during World War II, was able, because of the GI Bill, to afford an undergraduate education in chemistry at the University of Arizona. By 1987, Mr. Rogers was selected to serve on the Air Force’s Scientific Advisory Board where he held a civilian rank equivalent to that of a Lieutenant General. For his scientific work he received a Distinguished Service Award.

When Colin Berry first came on the Shroud of Turin scene I had hoped for a worthy skeptic to honestly challenge and question the science that was out there. It didn’t happen. Instead he started referring to the works of others as Mickey Mouse science and calling fellow scientists idiots. He used snide language such as he just did in referring to Rogers and Adler as St. Raymond and St. Alan and the rest of us as starry-eyed pseudo-science groupies.  And he seems to be amazed that we are not impressed.

Many people have suggested that I simply ignore his website. No. Go read it. It is a testament to the sad state of scientific shroud skepticism. It may actually, unintentionally, help convince some perceptive people that the shroud just might be authentic.