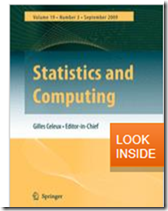 In the April 2012 issue of the journal Statistics and Computing is an article entitled “Regression analysis with partially labelled regressors: carbon dating of the Shroud of Turin,” by Marco Riani, Anthony C. Atkinson, Giulio Fanti and Fabio Crosilla. The abstract reads:

The twelve results from the 1988 radio carbon dating of the Shroud of Turin show surprising heterogeneity. We try to explain this lack of homogeneity by regression on spatial coordinates. However, although the locations of the samples sent to the three laboratories involved are known, the locations of the 12 subsamples within these samples are not. We consider all 387,072 plausible spatial allocations and analyse the resulting distributions of statistics. Plots of robust regression residuals from the forward search indicate that some sets of allocations are implausible. We establish the existence of a trend in the results and suggest how better experimental design would have enabled stronger conclusions to have been drawn from this multi-centre experiment.

This just adds to the mountain of information that completely invalidates 1988 carbon dating of the shroud. Even so, you will hear people say, as they have said here, the dating stands until redone. Or you will hear that it is still the default or official test. You will even hear that the evidence that disputes the carbon dating is insufficient or Improper. What are they thinking? Is there some Marquess of Queensberry rule in science that disallows common sense? Granted this statistical analysis will feel like a hard, low, below the belt blow. Nonetheless, it knocks the air of quality out of the work done by the three labs in 1988.

Unfortunately the article is behind a pay wall ($34.95). Regression analysis with partially labelled regressors: carbon dating of the Shroud of Turin – Online First – Springer

24 thoughts on “New Peer Reviewed Paper on the Carbon Dating of the Shroud of Turin.”